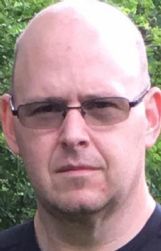 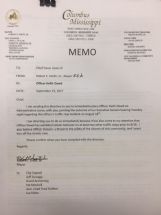 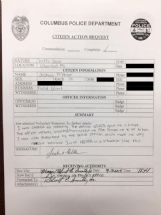 Columbus Mayor Robert Smith on Wednesday ordered Police Chief Oscar Lewis to place on administrative leave a patrol officer being investigated for his conduct during a traffic stop.

In a memo Smith made public just after 12:30 p.m., the mayor orders that 48-year-old officer Keith Dowd remain on leave, with pay, pending the outcome of the city council's planned discussion about his conduct next week. The council meets at 5 p.m. Tuesday in the Municipal Complex, and Smith said the personnel matter will be discussed in executive session.

City officials confirmed Lewis has since agreed to carry out the directive.

On Aug. 18, Dowd, a white officer, stopped 20-year-old Joshua Hibbler, who is black, near the intersection of Airline Road and Eastwood Drive in east Columbus. Body camera footage of the 13-minute incident The Dispatch obtained via an Open Records Act request shows the officer -- with a raised voice -- insulting Hibbler, as well as accusing him of lying and smoking marijuana.

At one point, Dowd said he could "empty a magazine" from his service weapon into the pulled over car if Hibbler didn't stop moving his hands. Dowd ultimately let Hibbler go with a warning, rather than writing him a ticket.

Lewis initially issued Dowd a written reprimand for the incident and left him on active duty. A police source and one of Hibbler's relatives then notified Smith, and after the mayor watched the body camera footage, he pressed the council for a further investigation.

According to Smith's memo, though, Dowd had "exhibited similar behavior" on at least two other traffic stops while working for CPD prior to Aug. 18.

"I also believe Officer Dowd is a threat to the safety of the citizens of this community, and I want him off the streets now," the memo says.

Also Wednesday, Hibbler filed a formal complaint against Dowd with CPD, claiming he was harassed and "forced to lie." Hibbler, speaking with The Dispatch, confirmed the complaint and City Public Information Officer Joe Dillon has since provided a screen shot of the document via text message.

Dowd began working with Columbus Police Department on July 24 and is still serving his post-hire probation. He worked for Jackson Police Department from 2002-08 and most recently for the University of Mississippi Medical Center police force.

In an instance in 2006, JPD suspended Dowd for 15 days after he handcuffed a female videographer for the Jackson-based WAPT news station to keep her from capturing footage of a fatal wreck scene involving another officer, a source with WAPT confirmed to The Dispatch this morning.