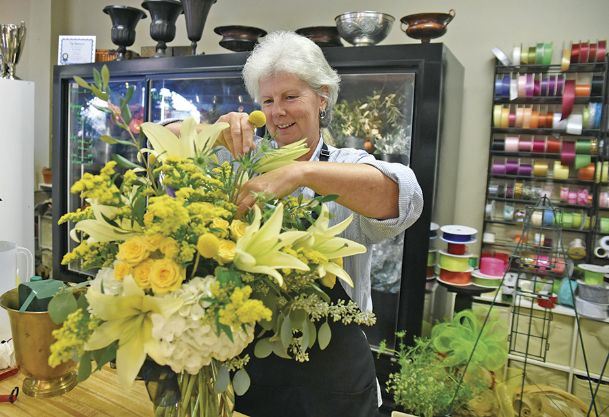 Tammy Youngblood, who owns Ivy Cottage Florist on Highway 45 North in Columbus, prepares a bouquet Friday. Youngblood said she chooses not to judge customers and it will be business as usual once a law that allows businesses to refuse services based on religious grounds goes into effect Tuesday. Photo by: Deanna Robinson/Dispatch Staff

Nicole Huff designs a wedding cake in the back room of Southern Flour Bakery, the bakery she owns on Highway 45 North in Columbus. Huff has said she has no plans to change her business practices or turn away same-sex couples when House Bill 1523 goes into effect.
Photo by: Deanna Robinson/Dispatch Staff

When Mississippi House Bill 1523, the religious freedom bill allowing business owners to turn away customers because of their sexuality, goes into effect Tuesday, Tammy Youngblood has no plans to change how she does business.

If anything, the owner of Ivy Cottage Florist off Highway 45 is "bummed" that the law is going into effect at all, she said.

"At no point will I ask anyone anything about their sex," she said. "And I don't care if it's a bride and bride or a groom and a groom that comes in."

"I treat everyone fairly," she added. "I would never be disrespectful to another human being and I think that's based on my religion."

The controversial bill, passed in 2016, allows government employees and businesses to refuse to provide services to members of the LGBT community due to religious or moral beliefs that oppose same-sex marriage, transgender people or extramarital sex.

Proponents of the bill says it allows business owners and government officials like circuit clerks to not have to condone or participate in something that goes against their religious beliefs.

"I am so tired of the federal courts, you know, punishing Christianity," District 37 Representative Gary Chism (R-Columbus) told The Dispatch Thursday. "...All this bill does is say that you haven't got to participate in immoral situations if you don't (want) to. ... If you don't want to participate in a gay wedding or make a cake or florals or whatever else, I mean, don't push your beliefs on me. All this bill says is we're not going to punish you for your Christian beliefs. So I am all for this bill."

But opponents say the law is discriminatory. A U.S. district judge blocked the law from taking effect in 2016 after ruling it was unconstitutional for establishing preferred religious beliefs over others and for discriminating against gay, lesbian and transgender individuals. In June of this year, an appeals court panel lifted the hold.

More than discriminatory, it's redundant and will have no practical effect, argues Matt Steffey, law professor at Mississippi College School of Law.

There is already a religious freedom bill to protect business owners and government officials from doing business or work that would infringe on their religious rights, he said, referring to the Mississippi Religious Freedom Restoration Act of 2014. The only difference between the 2014 bill and the 2016 bill going into effect next week is the 2014 bill does not explicitly favor one religious view over another.

"We've already got the general subject of religious freedom covered," he said. "Which makes this law both redundant and perverse. In other words, it can't do any more than the law we already have, and it's perverse in the sense that it's the first time in my memory that our state government identifies a specific religious belief that the state of Mississippi valued and endorsed."

Chism agreed identifying the specific beliefs was the only difference between the two bills, but said that was the point. He said it explicitly identified three religious beliefs that he considers to also be "natural law": that marriage is between a man and a woman, that sex belongs in such a marriage and that sex is determined at the time of birth.

"We're just as a state going to send a message to any other state around that we're different," he said. "We're not going to go the way of Sodom and Gomorrah."

But many business owners in the Golden Triangle, at least, have no plans to change who they do business with.

"It's not Christian to judge people," said Nicole Huff, owner of Southern Flour Bakery on Highway 45.

Huff has owned the Columbus bakery for two years but says she worked in Missouri several years ago where she designed plenty of cakes for weddings of same-sex couples. She just designs the cakes. What people do after they leave her shop is none of her business, she said.

Blaine Walters, owner of Bride and Groom Bridal Boutique on Fifth Street South in downtown Columbus, also said he would not change the way he did business.

"We just want to treat every customer with respect and we view all money as green," he said. "That's just how I want to be treated wherever I go."

And Mark Taylor, owner of Starkville's The Cake Box Eatery and Bakery, said he will not refuse to do business with anyone unless they're being disruptive -- which almost never happens, he said, because his business doesn't serve alcohol.

"Our doors are open to anyone," he said.

No business owner The Dispatch was able to contact said they would use HB1523 to change business practices or refuse to do business specifically with same-sex couples. However several business owners in West Point did not want to speak for the article. Owners of one business in Starkville said they were concerned about backlash from religious customers if they were quoted in the article.