Caledonia student claims he was suspended for conduct during national anthem 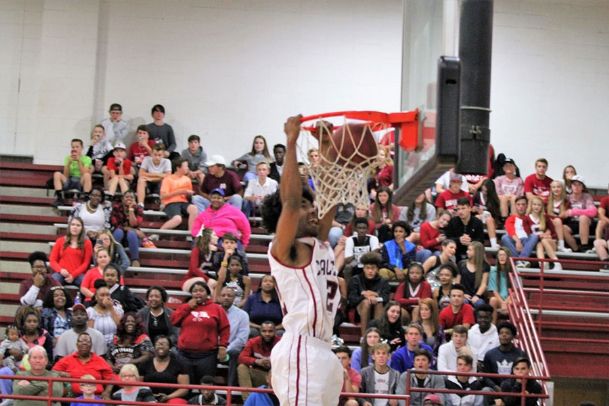 Chase Neal, a Caledonia High School basketball player, dunks a basketball in this undated courtesy photo. Neal claims he was suspended from school for not properly saluting the American flag during the playing of the national anthem at a school event this week. Photo by: Courtesy photo

A Caledonia High School basketball player claims he was suspended from school for not properly saluting the American flag during the playing of the national anthem at a school event this week.

School officials, however, say the student's suspension has nothing to do with his conduct during the national anthem.

Chase Neal, a 16-year-old junior, said he and his teammates participated in a slam-dunk contest and fundraiser for the basketball program Monday night in the high school's gymnasium. All the players stood and faced the flag for the playing of the "Star Spangled Banner," but he said he and three of his teammates tucked their hands behind their back during the song rather than place them over their hearts.

The act, at least on his part, was not meant as a demonstration, Neal said.

The next day, he said the school principal, Andy Stevens, verbally reprimanded him for the act. On Wednesday, Neal said he was removed from his first-period class and placed in in-school suspension without explanation. After he protested an assignment to copy from the encyclopedia in ISS, he was suspended from campus for three days.

Protests during the anthem have become increasingly popular among athletes on the high school, college and professional levels who kneel as the song plays to protest police brutality and other types of injustices against people of color.

While Neal said he is still trying to find out why exactly he's being punished, he believes it directly relates to the anthem incident.

"Our coach had told us before the (event) we could either put our hands on our hearts or behind our backs during the anthem," Neal said during an interview at The Dispatch he attended Wednesday with his grandparents, Willie and Gloria Humphries. "I didn't mean it as any type of rebellious activity. I wasn't even really thinking about it when I did it.

When asked directly, head boys' basketball coach Gary Griffin said he instructed his players to stand but did not comment on whether he told them where to place their hands during the song.

Neal also believes his race may have been a factor in his discipline.

"I do think if this (involved a student) of a different color, this wouldn't have happened," he later added of his suspension.

All four players are reportedly black, but Neal was the only student disciplined, according to school officials.

School district superintendent Lynn Wright told The Dispatch the student was disciplined for classroom issues unrelated to Monday's event. Neal landed in ISS for disobeying a classroom teacher Wednesday morning, Wright said, and was suspended from campus for failing to comply with his assignment while in ISS.

Wright did say, however, Stevens reportedly talked to the four students involved in the anthem incident. As to the players' exact conduct, Wright said he didn't attend the event and did not see it for himself.

"My understanding is (the principal) just conveyed to them what the expectations are," Wright said. "No one was disciplined for it."

Those expectations, Wright said, are to stand, remove your hat and place your hand on your heart during the anthem.

"That's the same thing that's in the Mississippi High School Athletics Association statement they ask us to read at every game," he added.

The Dispatch attempted to reach Stevens Wednesday at the school, but an office employee said he was unavailable.

First, school board attorney Jeff Smith attempted to write a policy requiring everyone, including all spectators, to stand for the anthem at school functions where it is played. The board, however, did not adopt such a policy at its October meeting and Wright said he doesn't know when, or even if, that might come to fruition.

In the absence of a policy directly related to the anthem, Wright said the district is leaning on an existing rule stating students are to obey any instruction from a teacher, administrator or other authority figure while at school functions unless the instruction is "unreasonable, illegal, unethical" or compromises student safety.

Beyond that, Wright said he also had requested teachers show all school district students a documentary on the origins of "The Star Spangled Banner," as well as a Johnny Cash-narrated YouTube video called "The Ragged Old Flag."

A U.S. Supreme Court decision from 1943 (West Virginia Board of Education v. Barnette) ruled students cannot be punished for not participating in religious or patriotic ceremonies. Both Wright and Smith contend that doesn't apply to extra-curricular activities.

Even if they're wrong about that, Wright said "dishonoring the flag" is hardly a problem at LCSD.

"Fortunately, living here in the South, we tend to honor God and honor our country," he said. "Our students understand that, and a lot of them have family serving in the military."

For those who want to protest injustices, Wright said there are more appropriate forums than during the national anthem.

"We respect everybody's right to free speech, but a lot of this is about reasonable expectation," he said. "For example, if you go to the beach, you might see a man with his shirt off or a woman wearing a swimsuit. But you're not going to see them dressed like that at church because, even if it's not illegal, there's a reasonable expectation.

"Certain speech is unacceptable in certain places," he added.