Too old to drive?: Seniors giving up car keys often a thorny topic for families 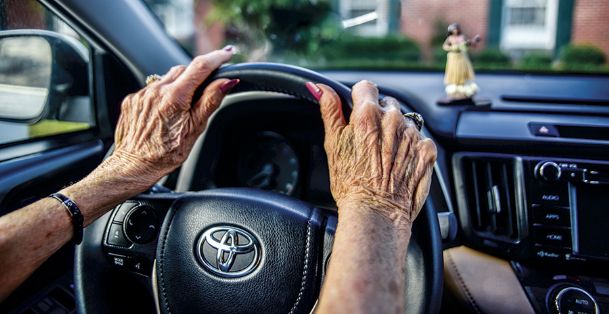 Many senior citizens come to the point where they have to give up their car keys â voluntarily or involuntarily. Even for those who reluctantly decide on their own to stop driving, the loss of freedom can be hard to accept. Photo by: Luisa Porter/Dispatch Staff

By the time Bob had reached his 83rd birthday, he had made quite a few concessions to age, said his son Tom.

Bob gave up hunting in his 70s, a passion he had since his childhood growing up in Monroe County. He no longer mowed his own yard or cleaned his own gutters. In fact, five years ago, Tom had managed to convince his dad to sell the home he had bought in Oktibbeha County in the 1950s with his wife, who had passed away in 2008, and move in with Tom's family in Starkville.

But there was one thing Bob refused to give up, at least not without a struggle:

The names of the two men have been changed for the purposes of this story, which remains something of a sore topic for Tom's dad.

"My dad had always been an OK driver, but in the past year or so he was driving, he started having these little accidents. Nothing major," Tom said. "He backed into someone in a parking lot at the grocery store, and another time he ruined a rim when he turned a corner and hit a curb. Every week or two, you'd see a new scratch or little dent on his truck."

When Tom brought up these minor incidents as proof Bob should consider giving up his car keys, Bob was resolute in his objections.

"I did everything I could think of," Tom said. "I told him he could save money by not having to pay for insurance or gas or maintenance. I tried to bribe him and offer all kinds of deals. Nothing worked."

But when Bob sideswiped a government van while trying to fit into a parking space, Tom saw his chance.

"Like a lot of older people, Dad was pretty suspicious of the government," Tom said. "So when I told him I got a letter from the U.S. Attorney's Office saying that they were going to charge him if he didn't surrender his driver's license, Dad finally gave in."

That was three years ago and Bob hasn't driven since.

"One thing did surprise me a little," Tom said. "Dad never did ask to see that letter. Deep down, I think he knew the time had come, even though he probably still won't admit it."

The graying of the roadways

For most of car-obsessed America, getting a driver's license is one of life's watershed moments, opening the door to freedom, independence and spontaneity that proceeds adulthood.

Likewise, the decision to yield that freedom is something many seniors are reluctant to do.

According to the Centers for Disease Control, there are 40 million drivers age 65 or older in the U.S., twice as many as there were at the turn of the millennium.

As aging begins to impact a driver's reflexes, vision, depth perception and judgment, the risk of accidents begins to increase.

In 2014, more than 5,700 older adults were killed and more than 236,000 treated in emergency rooms for motor vehicle crash injuries.

The number of crashes that can be attributed solely to a driver's age is hard to assess, but according to Master Sgt. Criss Turnipseed of Mississippi Highway Patrol Troop G, these types of accidents aren't frequent.

"Based on the accidents we see, the cases where the accident could be attributed to being elderly is something we see only sporadically," Turnipseed said. "But accidents aren't the only factor when it comes to whether you should drive when you get older. One thing we are seeing a lot more of now are Sliver Alerts, where an elderly person is driving and becomes disoriented, gets confused and gets lost."

To drive or not to drive?

On a sunny Thursday morning, a group of five residents, ranging in age from 75 to 88, sat in a cozy common room at Trinity Place Retirement Community in Columbus.

They have a combined 350 years of driving experience -- 350 years and counting, since three of the five, including 88-year-old Gene Falkner, are still driving today.

Although he is in a wheelchair, Falkner still keeps his other wheels.

"I don't have any problems driving," he said. "About the only hard part I have with driving is getting in and out of my van. The driving part is easy."

Although 87-year-old Janie Slawson also continues to drive, she has a fixed date on when she'll give up her car keys.

The youngest of the group, 75-year-old Jim Holloway, gave up driving three years ago, a decision that ultimately led to him moving to Trinity Place, which provides transportation for its residents.

"I would still be driving today if I could," Holloway said. "But I had two cataract surgeries, two glaucoma surgeries and a detached retina surgery. I got to where I couldn't see, that's the main thing. When you can't see to drive, you don't want to put yourself in danger or somebody else in danger, so that was it."

Eleanor King, 82, also quit driving three years ago, a decision she made after being involved in a traffic accident.

She wasn't injured, either, but the accident was traumatizing enough to make her change her mind about driving.

"I just didn't think it was worth it to get another car because (Trinity personnel) take you anywhere you need to go," King said. "I really don't miss (driving)."

Freedom of movement is the primary benefit -- and primary loss -- where driving is concerned, they all agreed.

"I can still get to wherever I need to go," Holloway said. "They have a van here that you can use and I have someone that can take me places. But the biggest thing is there's a lot more planning you have to do when you don't drive anymore. You're dependent on other people.

"It's tough to give up," Holloway added. "Look, I've been divorced twice. I'd rather be divorced and be able to drive than be married and not able to drive."

Beth Blaxton, 80, said while she doesn't drive nearly as much as she used to, she still enjoys it.

"I drive maybe once a week -- to the gas station or maybe McDonald's or Burger King," Blaxton said. "I go see my son and grandchildren who live in Steens. Once in a while, I'll go to Houston, Mississippi. I have a granddaughter who lives over there. I used to go see my sister in Florida, but I haven't been down there in a while. It's not the distance. It's just that people are so bad now with this road rage.

"And sometimes, a few of us girls will go out to dinner and I'll drive," Blaxton added. "I'd hate to give that up. We have such a good time. I know the day is coming, but I'll sure miss the freedom. Right now, if I decide I want to go to Timbuktu, I can go."

Falkner said while he still feels safe driving, he believes he'll know when it's time to stop.

Tom, meanwhile, isn't so sure.

"That's the same thing my dad said," Tom said. "He said everybody has little accidents. I told him, 'Maybe. But not every time they get in the car, Dad.' That was pretty much the end of the discussion. ... Side-swiping that government van was a lucky break. He might still be driving through ditches and backing into people today."