After a wrongful conviction, a life of love: Remembering Levon Brooks 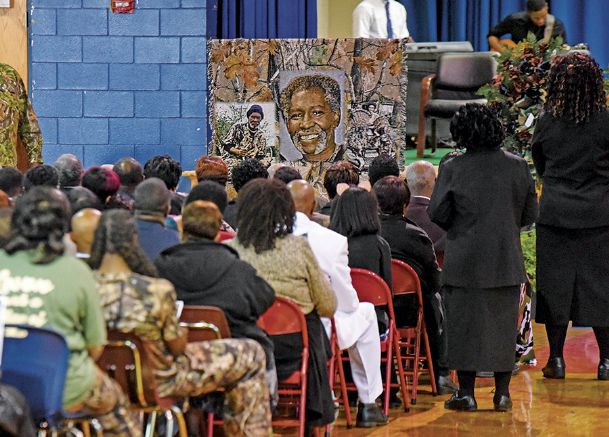 Family and friends gather for a celebration of life remembering Levon Brooks at Noxubee County High School Saturday morning. Many wore camouflage as an acknowledgment to Brooksâ love of hunting. Brooks was exonerated in 2008 after 18 years spent in prison for a murder he did not commit. Photo by: Deanna Robinson/Dispatch Staff

Friends, relatives, and admirers gathered Saturday to say goodbye to a remarkable man who had every reason to be filled with hate, but lived his days with nothing but love for everyone who crossed his path.

Levon Brooks, 58, died at his home near Crawford Jan. 24 after a long battle with colon cancer.

A Noxubee County native, Brooks, was known far and wide because of his incredible story of perseverance -- serving 18 years in prison after being convicted wrongly of a crime he didn't commit. Sentenced in 1992 to life in prison for the murder and rape of his girlfriend's daughter at Brooksville, he was freed in 2008 after DNA evidence preserved by District Attorney Forrest Allgood led investigators to the true killer -- Justin Albert Johnson. Johnson later confessed to the murder and a similar crime that had sent Brooksville resident Kennedy Brewer to Mississippi's Death Row for 13 years. Lawyers from the Innocence Project were working on the Brewer case when they uncovered the evidence existed to also clear Brooks.

Levon Brooks cried and hugged the lawyers on that day back in February, 2008 when he was announced free to go at the Noxubee Courthouse. Until just a short time before that he had relegated himself to a life of prison survival, convinced that he would never cleared of the horrible crime that he was accused of. He later described prison life as "hell" and said it was "day-to-day do what you have to do to survive."

Brooks' wife, Dinah, said his health had declined in recent months, but his death was still a "shock," she said.

In the years since his release, Brooks helped spread the word of the work being done with DNA technology with appearances around the country arranged by the Innocence Project. His and Brewer's stories were the subject of a documentary film that premiered in 2010 at Ole Miss, and two upcoming book projects, including "The Cadaver King," by Innocence Project lawyer Tucker Carrington who is based at Ole Miss. The book focuses on the flawed testimony of Hattiesburg dentist Michael West who testified about bite mark evidence at the trials of both Brooks and Brewer. It was later determined that what West described as bite marks on the victims' bodies, actually weren't bite marks at all, and occurred after the bodies were disposed of in bodies of water near their homes.

Brooks and Brewer are also the subject of a book that will be available in April by New York-based photographer Isabelle Armand.

Since his release from prison, Brooks has enjoyed hunting, fishing, and raising chickens. His backyard at Crawford is covered with chicken coops that house a menagerie of birds. He shared many of the birds he raised with friends and relatives and encouraged everyone he knew to build their own chicken coops.

In recent years he often reflected on the twists and turns of his life. "All those years I was locked up, I had lots of time to think about my situation and this is more than I was even able to dream about at that point," he said in an interview last year with The Beacon as he sat on a bucket fishing for bream. "But, in the years since I've been out, I decided I could spend the rest of my life being bitter, or spend it being a testament to God's blessings."

This story originally appeared in The Macon Beacon and is reprinted here with permission.