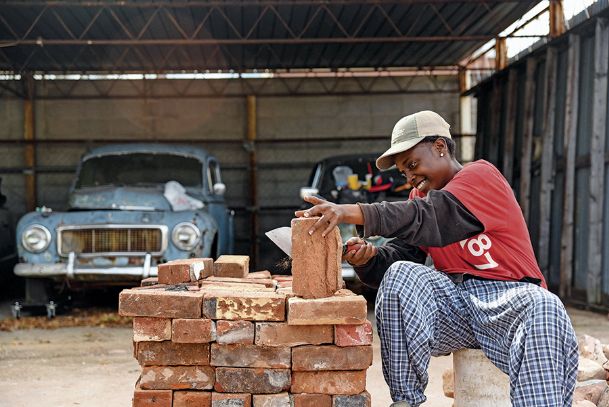 Jataune James sorts and cleans bricks at Waukaway Springs in Columbus Tuesday afternoon. Waukaway Springs is being restored to its former look. The building formerly housed Brown Buick Company. "It's neat cleaning bricks that they tore down just to put back up. Most people would have thrown them away and just got new ones but they are using the original bricks," James said. Photo by: Deanna Robinson/Dispatch Staff

Waukaway Springs Bottling Company is being restored to its former, historical, self on College Street in Columbus. The building housed Brown Buick Company in the 1940s.
Photo by: Deanna Robinson/Dispatch Staff

Waukaway Springs Bottling Company is undergoing building renovations in hopes to restore the building to its original look.

The College Street building, which operates the Waukaway warehouse, was built as Brown Buick Company in the 1940s. Over the years, it changed to Bishop Sign Company, and Waukaway Springs took it over for warehouse use in 2001.

Stephen Imes, Waukaway Springs president and owner, said the entire interior of the building is being renovated and the front entrance exterior will be completely remodeled. In addition, some of the wood-based walls will be torn down and replaced with steel to ensure they are sturdy enough.

According to Jim Buck Vaughn, project contractor, the roof was also caving in, and in the worst condition of everything being renovated.

"Right now, we have the mindset of taking it back to what it looked like in the 40s," Imes said. "We really just want to bring it back to its former glory."

In order to keep the building as historical as possible, Imes said Waukaway Springs salvaged some of the original brick used when Brown Buick Company was built. In fact, Waukaway employees are sorting and cleaning every brick by hand in the warehouse for reuse.

"Several different types of brick have come out of this process," Imes said. "We have seen a variety of manufacturers' work, and we plan to use as much of it as we can."

Having completed other renovations in the downtown Columbus area, including The Dispatch building in 2013, Buck said it was not about following a specific set of guidelines, but just matching the existing downtown atmosphere.

"We did have a picture of the Brown Buick Company to base our renovations off of," Buck said. "But it's mainly making sure we update the building, without making it entirely too modern to where it does not match the other buildings in the area."

Although still in the planning stages, Imes said he hopes to situate Waukaway Springs' offices in the front of the renovated building, in addition to offering rental spaces. The bottling warehouse will stay situated in the back of the building.

The building is expected to reopen in about three months, or early summer.

Editor's note: Waukaway Springs is owned by Stephen Imes, a member of the family who owns The Commercial Dispatch.