Pro-life advocate talks about being saved from abortion 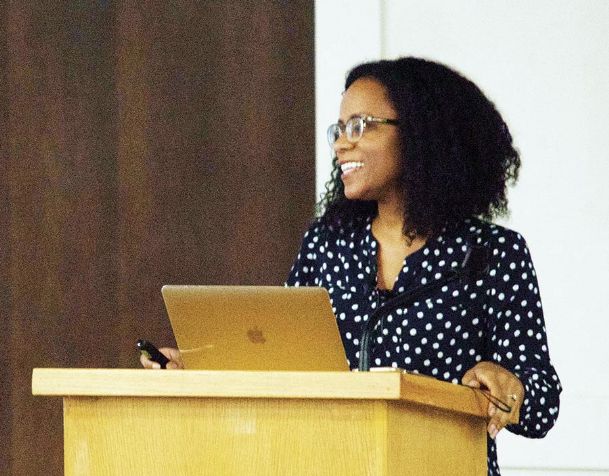 In 1981, Christina Bennett's mother walked into a Connecticut abortion clinic, with plans to undergo the procedure.

She had even paid for the procedure when a clinic custodian approached her in the waiting room.

"The custodian told her that 'God would grant her the strength to have this baby,'" Bennett told an audience gathered Tuesday in the Old Main Academic Center auditorium. "So, she walked out of the clinic and the rest is history. And now, here I am.

"I would have been dismembered, thrown into the trash and completely erased from history," she added. "So, people can say that it is a choice to get an abortion, but it is a violent one."

Bennett, a pro-life activist and speaker, presented her presentation "Abortion, Idolatry and Christ's Call to Compassion," which was hosted by The Mississippi State University Students for Life organization and the Catholic Campus Ministry, less than a week after MSU's Gender Studies Program brought Dr. Willie Parker, a well-known OB/GYN and abortion advocate.

However, at Bennett's presentation, there were no protesters waving signs outside of the Old Main Academic Center. Instead, the crowd of 40, much smaller than the capacity crowd Parker's presentation drew, consisted mostly of students from the two organizations that hosted the event and a few other community members.

Before her presentation, Bennett said she listened to Parker's presentation from last week because she wanted to share her differing views on the main points he tried to make in his "Christian case."

Although she continued by using four Bible verses as examples, Bennett said that abortion should not be an argument of religion but rather one of civil rights, noting an "American's greatest right is the right to life."

Bennett said she thought many people used language that refers to an abortion as a form of freedom or justice for the mothers, while not considering the pre-born child.

However, she continued, an abortion is a medical procedure that must be performed by a doctor. Although it is considered a "choice," Bennett said she did not think of it as a woman's personal freedom.

"I just think that is a very strong claim," Bennett said. "Especially as an African-American woman, those words are very important to me and my people. It really doesn't bring justice and liberate women like we've been told."

Referring to Parker's speech and beliefs, Bennett said science is often used as a "confirmation" for pro-choice individuals who believe that life cannot begin at conception.

Although this is the case often presented by the pro-choice side, Bennett said science actually confirms "pre-born life is worth protecting."

"I've had women come up to me and say the doctors told them 'it was just a lump of tissues or cells,'" Bennett said. "In the past, women couldn't always see an ultrasound, hear the heart beat, or take a picture on their iPhone.

"They were in their most vulnerable state and the industry took advantage of them, but technology makes that different," she added.

While Bennett said she does believe life begins at conception, she questions whether that argument really matters for either view. The majority of Americans are uncomfortable with late-term abortions, Bennett said, and even some pro-choice activists are uncomfortable with the concept of late-term abortions and killing a baby just because "the mother wanted to."

She said most pro-choicers who oppose late-term abortions think that "it is actually a baby" after a woman has carried for nine months, while thinking it's OK to undergo an abortion in the first trimester because "it is not a baby yet" at that point in pregnancy.

"I'm not going to be able to convince everyone on the point that life begins at conception, although I think it's pretty clear. But does that really matter?" Bennett asked. "I'm tired of drawing the line. Because all human life is valuable. Even if it is just the first trimester."