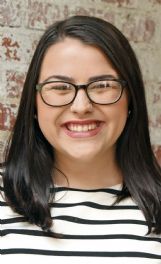 A Smoothie King is opening in Starkville.

Talk for the specialty beverage shop has been ongoing for over a year now. However, a demolition permit was issued and the previous building on the lot was torn down.

The shop is expected to open on Highway 12 across from the Middleton Court Shopping Complex.

The buzz originally started in 2016, when preliminary building plans were sent to the city planning department. Nothing came of it. Then, in February 2017 revised site plans were submitted for a space on Highway 12, across from The State Shopping Center.

Smoothie King has over 800 locations across the country, but this would be the first to open in the Golden Triangle Area.

Let's move on to a quaint office space in The Bungalow, which is located in downtown Starkville on Lampkin Street. Local graphic designer, Emily Mabry, and the creator behind Sparrow Ink Design, has reopened in the new office.

Mabry studied graphic design at Belhaven University in Jackson, and began freelancing during that time. But her vision for Sparrow Ink Design is simple- think small.

The idea is to maintain a small business, and although she said she welcomes clients of any type and from any size company or business, her passion lies within helping smaller, start-up businesses that may not have a large budget set aside for marketing.

Mabry said she specializes in company branding, but she can also do print and website design if needed.

There are a couple more things happening in Starkville.

One last thing, but this time in West Point.

Thomas Wholesale and Furniture has opened a second location in The Mossy Oak Shopping Center on Highway 45.

The furniture store's other location is in New Albany and was opened in 2011.