No shortage of Pride 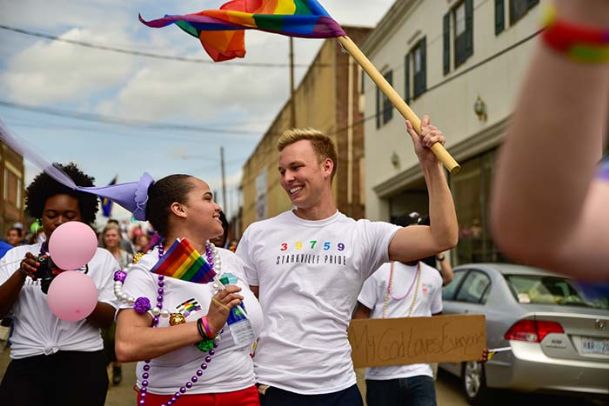 Lynn Spruill marches with fellow Pride supporters. "The marchers were great, the spectators were great. The police did an awesome job. It could not have gone any better," she said.
Photo by: Luisa Porter/ Dispatch Staff Mayor

Hal Shelby of Starkville stands in front of a man protesting against the Pride Parade Saturday at Fire Station Park. "Iâm not supportive of the LGBT community at all, as far as what they stand for. But I'm not in favor of people being treated the way they were being treated," he said.
Photo by: Luisa Porter/Dispatch Staff

It was a Pride parade, but proud was the operative word Saturday as a crowd estimated at easily more than 1,000 people marched Saturday in the inaugural event in Starkville.

The parade, which lasted approximately an hour, wound through downtown along the route similar to the one taken by the annual Christmas parade. Marchers in the LGBT (lesbian, gay, bisexual and transgender) support event waved their rainbow and equality flags, and carried banners identifying the groups they represented. Some even brought their dogs.

A dozen or so people dressed in drag costumes were sprinkled among the crowd of marchers, who tossed beads and candy to the roughly 1,000 spectators who lined the parade route.

A single group of protesters -- about a dozen members of Consuming Fire Fellowship Church in Gloster -- followed the parade route, carrying signs with Bible verse references and shouting out warnings God' s wrath, but there were no confrontations.

Parade participants took selfies with the protesters in the background. One marcher fashioned a cardboard sign that read "Hangry" with an arrow pointing to the protesters as she followed them along the sidewalk.

The atmosphere was fun, playful and, most important of all, safe.

"Everything went well," said Brandon Lovelady, public information officer for Starkville Police Department. "There were no incidents that we are aware of. There was one group of protesters, but they stayed on the sidewalk and didn't create any issues. Really, I'd say (the parade) went much like any other parade we've had over the years."

Starkville Mayor Lynn Spruill, who walked in the parade, said she was overwhelmed.

The parade, organized by Mississippi State students Bailey McDaniel and Emily Turner, captured national attention when the city's board of aldermen initially rejected a permit application for the parade. After a suit was filed against the city, the aldermen approved the parade permit on March 6.

That exposure turned what was initially planned as a parade of about 100 local people into an event much larger, drawing participants from areas far removed from Starkville.

Participants began arriving for the noon parade as early as 9 a.m. at Fire Station Park, which served as the parade staging area as well as the site of a Queer Arts Market.

Across the street, members of the protester group took turns yelling at those gathered in park as police stood by, carefully monitoring the exchanges.

Hal Selby, a pastor who works with a ministry called Refuge 641, silently faced each protester just inches away from them as they yelled across the street at the crowd.

"I'm not supportive of the LGBT community at all, as far as what they stand for," Selby said. "But I'm not in favor of people being treated the way they were being treated. I stood between them and those people because I wanted to take the wrath upon myself rather than it being directed at them."

One of the protesters Selby stood in front of was Kevin Pulver of Liberty.

Pulver said he was following the dictates of his faith in protesting the parade.

"The Bible says in Psalms, 'Who will stand up for me against the workers of iniquity?'" Pulver said. "When the entire culture is terrified of the sodomite agenda, we want to stand up for God and tell them that Jesus Christ can set them free from their sin and perversion."

McDaniel said she felt some anxiety about how the crowd would respond to those kinds of verbal attacks.

"I was pretty concerned about what would happen," McDaniel said. "It's an emotional time and being told that you are not supposed to be here and that you're going to hell, that can bring out a lot in someone. I was afraid people weren't going to enjoy the fullness of what this event is because of the (protesters) and that it might end in violence or that something might happen where the police would have to engage. Nothing happened. It was amazing."

Just as the fear of mass protests and potential violence proved to be unfounded, concerns over the conduct of the participants proved to be a non-issue as well.

There were no lewd acts or vulgar signs or incidents of indecent exposure that are often the hallmark of Pride parades in many large cities. Only a few couples even held hands.

"I couldn't be more pleased," Spruill said. "The marchers were great, the spectators were great. The police did an awesome job. It could not have gone any better."

"I'm just so proud," McDaniel said. "I think today set the precedent for all the Pride parades that will come over the years. It feels amazing."