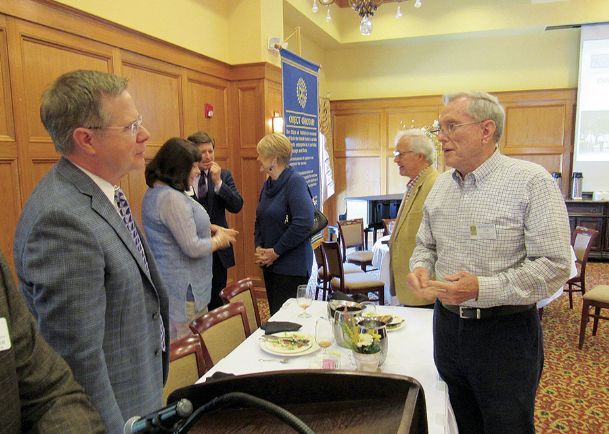 During Tuesday's speaking engagement at the Columbus Rotary Club meeting at Lion Hills Center, University of Mississippi Chancellor Jeff Vitter set the record straight on one point: He does not wear a back brace.

"It's a copy of our strategic plan," Vitter said. "I keep it in my back pocket wherever I go."

The plan has not been reduced to a pocket-sized pamphlet. It is contained in an 8-by-11-inch plastic binder that Vitter folds over and sticks in his hip pockets.

"It's rough on pockets," he admitted. "When I went to an Ole Miss Women's Council (meeting), one of the women gave me a hug. She thought I was wearing a back brace."

Vitter said he can't bear to be without the plan, which details a $1 billion plan designed to carry Ole Miss into a future when students and communities are transformed through the power of higher education.

"Copies are available," he quipped. "With Mother's Day and Father's Day coming up, that's something to keep in mind. Get a copy and put it in your office: You'll be the most popular person in your entire office."

Vitter spent his time with the Rotarians noting some of university's achievements since his arrival as chancellor in January 2016 as well as highlighting some of the goals contained in the strategic plan.

"At the core of our plan is academic excellence," Vitter said, noting new programs in accounting, medical studies, engineering and business development that will benefit not only students, but entire communities and the state.

"One constant in all of my 38 years in higher education is seeing the power of higher education and how it transforms lives, communities and the work," Vitter said. "It creates opportunities, inspires people and gives every individual the innate ability to lift themselves and break the cycle of poverty. There is no more important investment we can make as a state."

Vitter lauded the university's recent designation as a Carnegie R1 research university, the most prestigious honor that can be bestowed on a university.

"The research we are doing right now has an impact not only throughout our state and nation, but across the world," he said.

While Ole Miss is adding infrastructure and programs, the university is taking a strategic view on enrollment.

"We're not actually looking to increase enrollment," he said. "Our freshman class was about 1 percent smaller than it was last year and it will probably be another 1 percent lower next year."

The goal, he said, was to increase out-of-state and international student populations, which he said helps subsidize in-state students.

"Our tuition and fees do not cover the full cost of in-state students," he said. "So attracting outstanding students from other areas helps us cover those costs in the out-of-state tuition they pay."

Vitter said 42 percent of the student population is from out-of-state, by a large margin the highest out-of-state percentage of any of Mississippi's other seven state-supported universities.