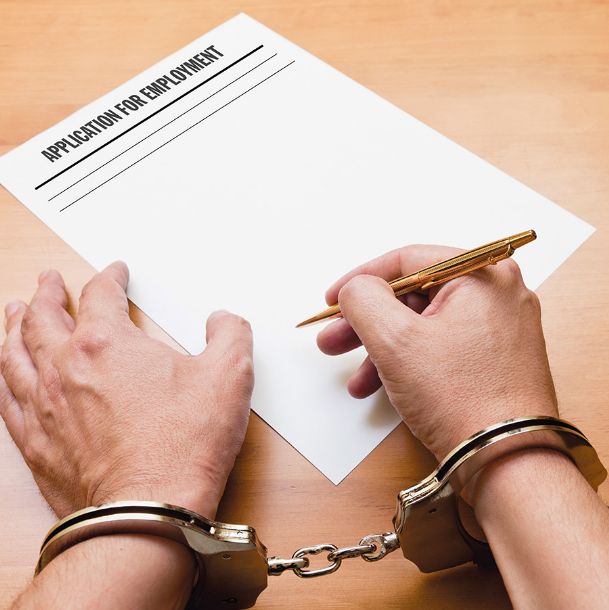 Dental assistant David Duett prepares for patients at the Columbus Dental Clinic on Tuesday. Duett has worked for the clinic on and off for 15 years, including after he was released from Mississippi Department of Corrections after serving three years for a drug charge. Duett said it's hard for convicted felons to find jobs after their release and is grateful to Columbus Dental for giving him a second chance.
Photo by: Isabelle Altman/Dispatch Staff

Brick grader German Smith and Human Resources manager Lucy Anne Walker discuss work at Columbus Brick on Monday. Smith has served two prison sentences for separate charges but has continued to work at Columbus Brick. Walker said Columbus Brick, while cautious about hires, has always believed people should be given second and third chances and is open to hiring employees with a criminal record.
Photo by: Isabelle Altman/Dispatch Staff

The Columbus native had been referred for the position by the business' owner. The hiring manager had come to the portion of the interview where she talked about salary and time off, and Duett was hopeful.

But then the manager turned the page of Duett's application and saw his background.

"(When) she saw I'd been arrested and saw that I had a felony conviction, it's like the door shut," Duett remembered. "I went from thinking I was fixing to start a job the next day to I didn't even get a call back."

Duett had become addicted to methamphetamines in the early 2000s. In 2008, he was arrested for conspiracy to manufacture methamphetamines and served three years in the Mississippi Department of Corrections. Upon his release, he learned how devastating it is to be turned down for employment because of a past mistake.

"The word felony, on your record, is the worst word you could ever have," he said. "... That word follows you everywhere you go."

Duett eventually regained his old job as a dental assistant at Columbus Dental Clinic -- he credited Dr. John Fields with giving him a second chance. Not everyone would have done that, Duett said.

MDOC authorities, however, are hoping more employers will soon become more open to giving felons second chances. Matthew Riley, MDOC's statewide re-entry coordinator, has hosted the "82 Counties in 82 Days" initiative to travel the state and encourage employers to look at the possibility of hiring those with criminal records.

In Lowndes and Oktibbeha counties, Riley said, that includes everything from manufacturing companies to major corporations like Wal-Mart.

"National data tells us that if a returning citizen is employed, they are three times less likely to recidivate," Riley said. "That's why our employment push is so, so important."

MDOC currently has programs allowing inmates to complete academic or vocational training so they can develop the skills they need for employment, Riley said. There are currently between 200 and 300 inmates enrolled in those programs now, most with drug charges and about two years of time to serve.

It can be tricky to find the right employment fit for people with criminal backgrounds, however. Certain charges prevent employment with certain companies, industries or positions. For example, Riley said, someone with a burglary charge cannot be hired to deliver furniture.

"But they can work in the warehouse loading the truck for the other guys to deliver the furniture," Riley said. "... They have some wiggle room to work around some of their charges."

At EMCC, Workforce Community Outreach Coordinator Sha'Carla Petty said the college's career navigators have similar issues when helping felons find jobs. For example, she said, someone with a money laundering charge won't be employed at a bank, and plenty of felonies preclude individuals from becoming nurses and other types of health care professionals.

"Most of the people that we have gotten that I know of, they do more of the hands-on technical-style programs," Petty said. "So you can get hired within construction, or if you do welding jobs and stuff like that."

And plenty of employers, as Duett found, are either unable or unwilling to hire anyone who has been arrested and convicted of a felony.

"Some employers have some wiggle room depending on the charge, how long it's been, the nature of the charge," Riley said. "They look at that criteria. Then other employers that we talk to, they just say, 'Mr. Riley, we appreciate what you're doing, but we just can't take a chance on anyone with a conviction on their background.' And we understand that."

Employers whose policies allow for the hiring of ex-convicts don't usually regret their decisions, both Riley and Petty said.

"Many of them appreciate what we're doing because many, many of them actually have hired individuals with a record and some of the employees are on probation or parole now," Riley said. "A lot of the feedback I've gotten is some of these men and women are some of the best employees."

Locally, Columbus Brick is one such company. Founded in the 1800s, the brick manufacturing company stayed in the same family for more than 125 years before selling to a larger Tennessee-based company last year.

For the company's entire history, hiring those with criminal records has been part of the company's policies. Typically, they've been pleased with their decisions, said Human Resources and Safety Manager Lucy Anne Walker.

"They're just like all the other populations," Walker said. "There are going to be some that don't work out well. But a lot of times, I think, if you have especially served some length of time, you come out really wanting to make a change."

Of the company's approximately 85 employees, a handful have served prison time.

"It's just something the owners have believed very strongly in, that people deserve second, and sometimes third, chances," Walker said. "So we are more than happy to do that."

She added the company is careful about doing background checks and, particularly as it becomes larger, being more cautious about hiring those with more severe charges.

German Smith, son of Mayor Robert Smith, is one of the Columbus Brick employees with a background. At 21, he was sentenced to 3-1/2 years in MDOC for robbery, and a few years after his release, he was arrested again for possession of a weapon by a convicted felon. Both times upon his release to the "free world," as he called it, he worked for Columbus Brick as a brick grader -- which was a relief for him.

"Most people, they look at your background. 'Oh, you're a felon. We ain't going to hire,'" Smith said. "Not at the Brickyard. They give you a second chance."

Likewise, Duett said he was grateful to Fields and Columbus Dental for giving him a second chance.

"People will forgive you, but they never forget," he said.