Senator's son to spend three years in prison for robbery 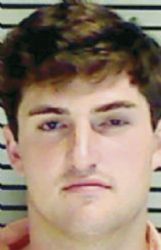 The son of a state legislator will spend three years in the Mississippi Department of Corrections after pleading guilty to robbery.

Colton Younger was indicted in April 2016. He is accused of robbing a Fast Break convenience store on Highway 45 on Dec. 21, 2015. Court documents said Colton stole a "large amount of money."

District Attorney Scott Colom said he originally offered Colton a plea deal of 15 years in prison with 10 years to serve. He said Colton rejected the offer to enter an open plea.

"I have a policy of not commenting on judge's sentencing," Colom said. "But it's important to note that this was the judge's decision."

Colton's attorney, Rod Ray, did not return a call from The Dispatch by press time.

Though the indictment did not indicate Colton Younger used a weapon during the robbery, the victim's impact statement said she was in fear of her life "from getting a gun pointed at" her, according to previous reporting by The Dispatch.

Younger was indicted for drug charges in Lowndes County in 2015 for possession of OxyContin, but those have been dismissed as part of the plea, Colom said.