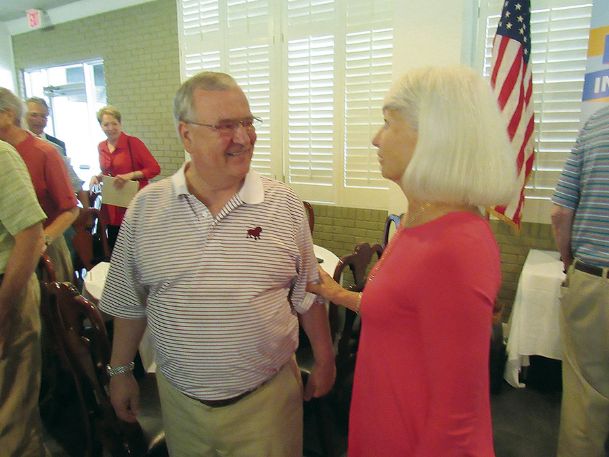 Steve Brandon chats with Starkville Rotary Club member Sandra Harpole Monday after his slide show from his recent trip to Africa. Brandon and his wife, Patsy, have photographed wildlife on all seven continents. Photo by: Slim Smith/Dispatch Staff

Steve Brandon has shot wildlife on all seven continents, but aside from some pesky insects, he hasn't killed anything.

But that doesn't mean he doesn't have trophies, which come in the form of his prized wildlife photographs.

Monday, Brandon shared his latest wildlife adventure -- photos from his two-week African safari -- at the Starkville Rotary Club meeting. Since retiring from his position as vice president for international operations at Monster.com in 2002, Brandon, with his wife Patsy, have been roaming the continents taking photos, then returning home to share their adventures with various civic clubs and organizations.

Monday's visit to the Starkville Rotary Club was one of many he had made to the group over the past 16 years, but as he spoke of his trip to Africa and shared the photos and stories behind the photos, it was clear this trip was special.

Brandon spent two weeks in Tanzania, following the ancient route of what is known as The Great Migration through the Serengeti, widely recognized as one of the greatest spectacles in nature.

"You really can't get a full sense of its magnitude," Brandon said. "It's a continuous 1,800-mile trip as the herds following the greening of the grasses and seasons."

Moving with the herd, Brandon's group traveled approximately five miles a day. Along the way, Brandon photographed the migrating herds -- an estimated 1.6 million wildebeests, 470,000 gazelles and 260,000 zebras -- and, of course, the animals encountered along the way -- elephants, birds of all sorts, and predators like crocodiles, leopards, lions and hyenas.

Through his photos, Brandon shared the stories of the animals he encountered.

The impala: "Our guide calls them 'McDonald's with hooves.' Everything out there seems to eat impalas."

Lions resting in the shade of a safari truck: "The lions are familiar with the trucks, so they're no threat. In fact, the lions kind of look at the trucks as shade trees on wheels."

On stampeding wildebeests: "They just take off running wild, for no reason. Our guide said they have the crazy-bug in their ear."

On the crossing of the Mara River: "You've all seen the this, with the herds of wildebeests and zebras crossing the river and the crocodiles pulling them under. What's interesting is how it happens. The crossing isn't voluntary. The herds mass at the riverbank and as more and more crowd in, the animals nearest the river are forced into the water. That's when the crossing begins."

Brandon said the natural beauty of the Serengeti, combined with the drama of the migration and the extraordinary variety of plant and animal life, made the trip one of his favorites.

But his adventures are far from over, he said.

"Next, we're off to see the Northern Lights," he said. "So we'll see you again after that."

To view Brandon's photos from his African safari and other adventures, go to: www.kingdomsafari.com