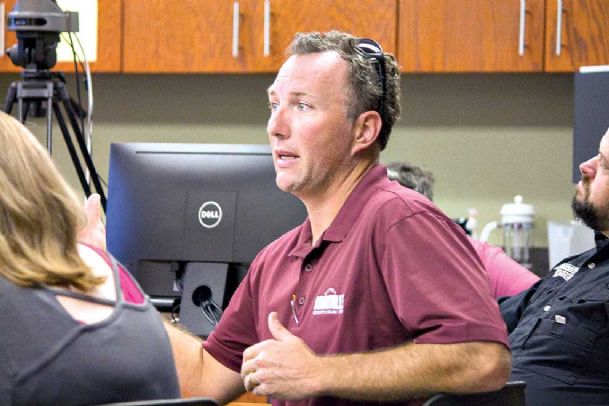 The city of Starkville is preparing for work at two intersections along Lynn Lane to help with traffic flow along the road.

City Engineer Edward Kemp, in a presentation during a Friday afternoon work session, said preparations are underway to widen Lynn Lane at its intersection with Industrial Park Road and at the intersection with Logan Drive at the Starkville Sportsplex's entrance.

Kemp said the projects are being funded under the $7.5 million bond issue aldermen approved last fall for road, sidewalk, drainage and traffic control improvements. Kemp told the Dispatch after the meeting both projects are estimated to cost about $600,000, combined. Work is currently planned to begin later in the fall and to finish in the winter.

The improvements are the result of a traffic study Starkville conducted with assistance from Neel-Schaffer about a year ago, Kemp said.

"We did evaluate both of the intersections on Lynn Lane -- one at the industrial park and one at the entrance to the Sportsplex which also coincides with Logan Drive across the street -- to evaluate its potential for a signal, three-way stop or all-way stop," Kemp said.

The study showed that traffic signals are not needed at either intersections, Kemp said, but some work will be done to address congestion.

"What's happening now is it's backing all the way up, really to McKee Park, if not further, based on one or two cars that are trying to turn left," Kemp said.

To address the issue, Kemp said the road will be widened to add a right turning lane near the intersection. That addition will allow more traffic to flow north while motorists who need to turn left wait to do so.

"It will add enough queue for three to four cars to turn left before it backs up," Kemp said. "I think that's going to more than adequately address the highest demand we're experiencing right there."

The work will also see a portion of the ditch that runs along the road's north side piped and covered.

Kemp, at a question from Ward 2 Alderman Sandra Sistrunk, said the intersection will not be turned into a three-way stop.

Officials expressed support for the project during the session. Ward 3 Alderman David Little said he thinks it will be good for the intersection.

"I think this is going to have a huge impact in a positive way there," Little said. "Like you said, one or two cars can back it up a few hundred yards."

At the Sportsplex, Kemp said the city will add a left turn lane into the facility's entrance for westbound traffic on Lynn Lane. The project will also see the road widened near the intersection. Lemp said the widening will also see a short left turn lane added on the intersection's west side for eastbound traffic to turn in to the residences along Logan Drive.

Kemp said the left turn lane in to the Sportsplex will have 200 feet of queue, which is room for about 10 cars.

Sistrunk noted that Lynn Lane has become a very busy street, especially with events at the Sportsplex. As such, she asked if the improvements are taking possible future need for a traffic light at the Sportsplex intersection into account.

"There's a pretty significant curve and some sightline issues with the curve if you're coming out and trying to merge with the Lynn Lane traffic," Sistrunk said. "As I understand it, (the situation doesn't) currently warrant a red light, but y'all are setting this up so that if and when it gets to the point, either with safety issues or traffic counts, it warrants a red light, we're prepared to do that."

Kemp said the work is including preparations for two two-arm traffic signals that would sit on either side of the intersection, if needed. He also said a secondary entrance to a parking area is being converted to a right turn in, right turn out intersection to not interfere with traffic in the new turn lane.

To do that, he said the work will require a short curb, similar to those that have been implemented along Highway 12.

"That's gonna force the cars that come out right, and that's to prevent any conflicts from a car turning out left and a car that's in the turn lane," he said.