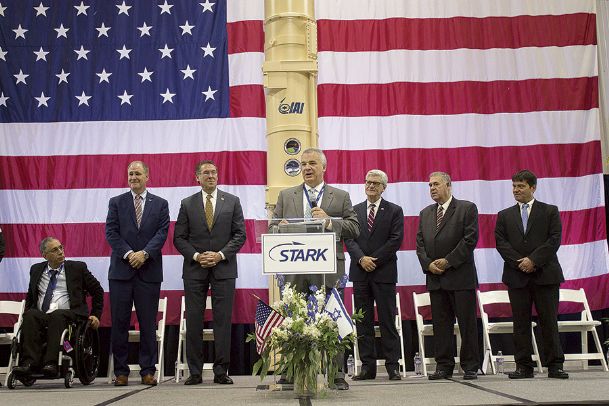 Stark Aerospace CEO Tom Ronaldi, flanked by Mississippi and Israeli officials, thanks guests for attending a commemoration event for the delivery of a missile defense canister to Israel. The canister, located behind Ronaldi, is part of the Arrow 3 missile defense system, which is geared toward intercepting ballistic missiles. Photo by: Alex Holloway/Dispatch Staff

Mose Patel, head of the Israel Missile Defense Organization in the Israel Ministry of Defense, speaks during a ceremony at Stark Aerospace to commemorate the delivery of the first Arrow 3 missile defense system canister to Israel. The canisters are being developed and manufactured at Stark.
Photo by: Alex Holloway/Dispatch Staff

A new ballistic missile defense system being developed for Israel will have a bit of the Golden Triangle in it.

Stark Aerospace, located near Golden Triangle Regional Airport, held a ceremony Monday to commemorate the delivery of the first canister for the Arrow 3 missile defense system to Israel. The system is designed to shoot down incoming missiles.

The canisters hold the anti-ballistic missiles the system fires to intercept incoming missiles. They are loaded into launchers, each of which can hold six canisters. The project is jointly developed by Israel Aerospace Industries, Boeing and Stark.

Some details of the program, such as cost and number of canisters to be produced, remain confidential, according to officials on Monday, but the project has led to significant job growth at Stark. CEO Tom Ronaldi said the company has 111 employees now -- roughly double the number it had a year ago.

Most of that growth has come from employing more welders, but he said the company has also increased the number of professional jobs such as procurement, management, wiring, quality assurance and mechanical engineers.

Ronaldi said Stark is trying as much as possible to gather materials from local sources for the canisters' development.

"One of the opportunities we see locally here is we try to source close to where we're doing our work," Ronaldi said. "Right now we've got 75 percent of the material cost coming from within two hours of Stark. We've tried very hard to share the wealth, as it was."

Moshe Patel, head of the Israel Missile Defense Organization of the Israel Ministry of Defense, with the Directorate of Defense Research and Development, said the program, which is funded by the U.S., benefits both Israel and American companies like Stark.

"We are combining the defense of Israel with bringing jobs to places like Mississippi," he said at Monday's ceremony. "Together it makes a big difference to us. As a government, we are very glad we have this capability here. On one hand, we can expedite our production capability, and on the second hand, money that is allocated us is being brought back to have more jobs in the United States for the defense of Israel. It's a win-win situation."

Boaz Levy, IAI executive vice president and general director of its Systems and Space Group, said that means it intercepts missiles in space, while the older Arrow 2 does not. Levy said the Arrow 3 system is another "stone in the wall" for the defense of Israel.

"The Arrow 2 is for a lower altitude," Levy said. "The Arrow 3 is actually intercepting ballistic threats deep in space."

"This is one of the most advanced systems in the world, but it needs a canister and we're manufacturing that canister right here," Bryant said. "Seventy percent of the materials used in the manufacturing of the canister come from Mississippi, so you're looking at Mississippi steel and a lot of Mississippi technology that goes in this."

Bryant added the canisters' development at Stark is the continuation of advanced military manufacturing in the state. Mississippi also produces missile defense radar systems at Raytheon in Forest, and Bryant said 70 percent of the U.S. Navy's surface combat fleet is built at Ingalls Shipbuilding in Pascagoula.

"It is amazing, I think, in the last decade where we have been able to come to protect not only America but the world by our manufacturing," Bryant said.

The program also received praise from U.S. Reps. Gregg Harper and Trent Kelly, both of whom attended. U.S. Sen. Roger Wicker, who was unable to attend in person, sent a video message praising the program.

During Monday's ceremony, Patel described the Arrow 3 system as the "uppermost tier" of Israel's strategic defense program. He said it's geared toward long-range threats that could come from neighboring Syria or from Iran.