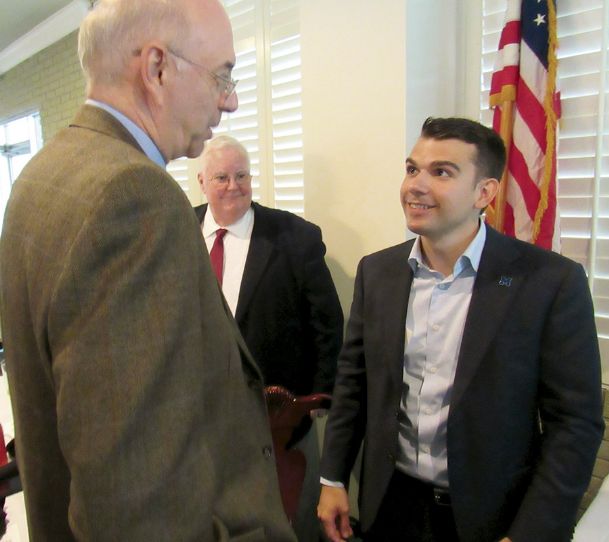 Noah Barbieri is the 51st Rhodes Scholar from Mississippi and, in many ways, the program's most unlikely.

Barbieri, 23, a Tupelo native and 2018 graduate of Millsaps College, where he majored in economics, philosophy and mathematics, shared his story Monday at the Starkville Rotary Club.

Medical conditions prevented him from attending school until seventh grade and interrupted his studies even then.

"I was born with a deformity in my chest," Barbieri said. "My chest kept caving in, to the point where my sternum was almost touching my spine."

To remedy the problem, a 16-inch metal bar was inserted into his chest, putting a swift end to one of Barbieri's dreams.

"I had always loved sports and wanted to play them all," he said. "I was doing that until my body gave out on me. The bar ended that dream. Another side-effect of the bar was that it hurt to laugh. I couldn't hang out and laugh with the other kids. I retreated into myself."

By the ninth grade, his continuing medical issues had forced him to miss so much school that he was third from the bottom in his class at Tupelo Christian Prep.

Although many factors contributed to Barbieri's rise through the academic ranks, none were more important than the one he made as an isolated and struggling ninth-grader.

"I made the decision as a 15-year-old that since I couldn't do all these things I loved, I would read at least one book every week," he said.

Reading sparked his intellect. By his senior year, he had risen from third-from-the-bottom to third in his class and had his choice of scholarships.

He eventually chose Millsaps, serving two years as student government president and graduating as class valedictorian, earning both a Truman (as a junior) and Rhodes scholarship.

The Rhodes Scholarship, named in honor of English politician and businessman John Rhodes, were first awarded in 1902 to students attending Oxford University in England. This year, 100 scholarships were awarded, including 32 from the U.S. More than 2,000 U.S. students apply each year. The two-year scholarship allows students to pursue any program offered by Oxford.

Like so many of his peers, Barbieri's idea was to get his education and "get out of Mississippi as fast as I could," he said.

But that began to change in his freshman year while working as a third-grade classroom assistant as part of his service program.

"The class was 99 percent African-American, 100-percent free-lunch eligible," Barbieri said. "The school didn't have air conditioning or heating, not even locks on the doors. The building was falling apart. I thought it was terrible, but for the kids it was a refuge.

Barbieri said that experience not only helped shape his plans, but it altered his attitude about his state.

"I began to fall in love with Mississippi because of how much difference you can make," he said. "There are so many opportunities to make a difference."

Barbieri said he believes focusing on those opportunities may help arrest the "brain drain" that continues to rob the state of its brightest and best college graduates.

Now he plans to return to Mississippi after he finishes his studies.

"From 2010 to 2016, the millennial population of Mississippi has declined by 30 percent," he said. "That's like losing my hometown of Tupelo in six years. So I really have been thinking about how we can keep these young people in our state. I think leveraging the idea that this is a place where you can really make a difference and raising wages would help. People in my generation want to live where they can have opportunities to make a real difference.

"The politicians in our state when they travel do a good job of telling everybody 'We're great. We're the best!'" he added. "But when they come home, the politicians keep saying that. Meanwhile, young people look around and see all the problems they don't talk about. They get disillusioned because (the politicians) aren't being called out on that. What I want to see happen is my generation calling out our leaders, demanding that we come out of this stagnation and working together to address these inequalities."