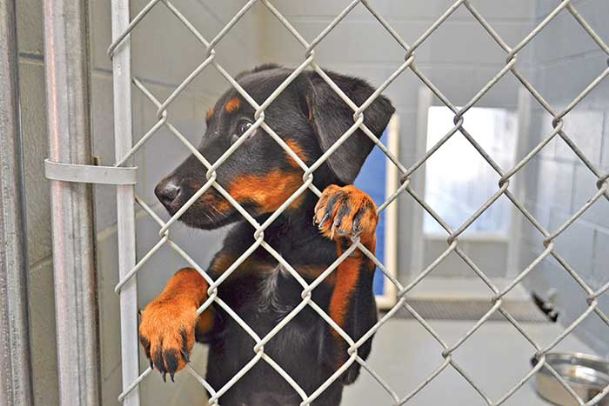 Nicollete, 14 weeks, waits at Columbus-Lowndes Humane Society for its new owner. Nicollete is a hound mix that was found with a litter of puppies in Columbus. Photo by: Mary Pollitz/Dispatch Staff

Oktibbeha County Humane Society volunteer Krissy Hollingworth takes Danni for a walk outside Saturday afternoon. Danni is a five-year-old pit bull mix who has been looking for a home since last month.
Photo by: Mary Pollitz/Dispatch Staff

When Jessica Horton moved away from her family and friends in Columbus, she knew her next stop was Hawaii Island Humane Society.

Horton said she saw a tiny Chihuahua cowering in her cage and some force kept bringing Horton to her. She finally asked if she could sit in the cage.

"When I got there and picked her up, she just melted in my arms," Horton said. "For me, it was a healing thing. She needed me and I needed her."

Horton lived in Hawaii for three years, before moving back to Columbus earlier last year. While on the island, she adopted her Chihuahua mix, Snickers, from a shelter and even fostered a Rottweiler-mix, Bear, with the intent of bringing him into the shelter.

"It was supposed to be a two-week trial basis," Horton said. "But now he's my baby."

Since the early 1980s, humane societies have recognized October as Adopt-a-Dog-Month. Jason Nickles, Columbus-Lowndes Humane Society manager, said the shelter has about 40-50 dogs available for adoption each month. He added nearly 70 percent of its dogs are strays, while the remaining are from owner-surrender.

"There's such a need for adopting a shelter pet, because it's non-stop every day," Nickles said. "You can come and visit with it, and see how the dog is going to be before you go home with it."

Potential dog parents can visit the humane society and fill out an application. Nickles said each application is reviewed in order, with each dog-parent interviewed. Once approved, the dog comes with a spay or neuter, age appropriate vaccines, wormer and heartworm medicine. Dog adoption fees typically range from $70-130.

Horton said the process of adopting was one of the best decisions she's made.

"I think people are afraid to adopt a dog, but give them a shot," Horton said. "Give them a good life. My two pets, they are my children. They fulfill a lot for us and enrich our lives."

Three years ago, Danielle Grimes moved to Starkville and would be living by herself for the first time. She knew living alone would be hard, so she drove to the Oktibbeha County Humane Society to find a protective dog to keep her company.

Grimes saw a litter of German-Shorthaired-Pointer, lab mix puppies, but one black-haired puppy kept looking at her. After passing the crate two or three times, Grimes filled out her paperwork and adopted her dog, Khaleesi.

"I picked her up and she just stared right at me, no matter how I held her," Grimes said. "We've always had rescue dogs in my family, and I knew I could give her a good home."

"Leesi was basically born around the same day my Uncle Bill died," Grimes said. "So I celebrate her birthday with him in that way. She came at a very rough time for me. She's my best friend. My passenger seat is known as Leesi's."

Chrissy Wells, manager of Oktibbeha County Humane Society, said the adoption process begins online at ochsms.org. Potential pet parents can find biographies of around 40-50 dogs or puppies looking for homes. Adoption fees for dogs range from $120-150, which includes heartworm medicine, flea prevention, spay or neuter, age appropriate vaccines and a microchip. Wells added, in the south, it's important to adopt because of the huge number of dogs in shelters.

"Adopting not only means you're saving one life," Wells said. "You're freeing up space for us to save another one. I encourage everyone to adopt. It's good for responsibility and it's good for the community."