Killing it with kindness: How a consultant found success in business by being kind, establishing boundaries 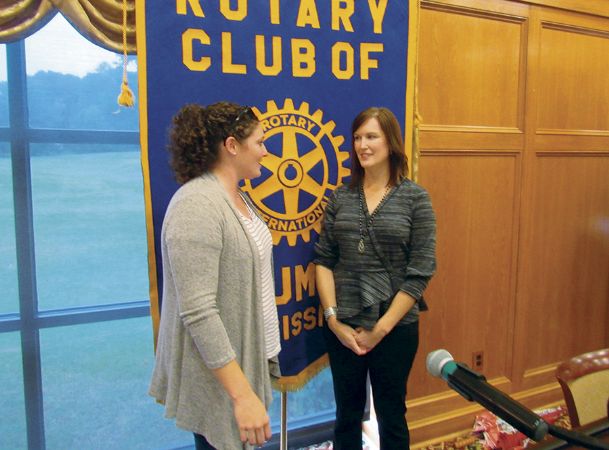 Ann Marie Chilcutt Miller, left, chats with Jennifer Spaulding, the guest speaker at Tuesday's Columbus Rotary Club luncheon. Spaulding, daughter of Rotary member Frank Howell, is a leadership and executive consultant based in Austin, Texas. She spoke on the subject of kindness as a leadership skill using information she had complied for an article she wrote for Forbes magazine. Photo by: Slim Smith/Dispatch Staff

When Jennifer Spaulding began her consulting career more than 25 years ago, she had a pretty good idea of what she needed to get ahead in the world of business.

After all, the language of business was peppered with advice: Crush the opponent, beat the other guy, win at all costs -- a lexicon littered with war and sports terminology.

Tuesday at the Columbus Rotary Club, Spaulding refuted that notion, using data collected from a handful of studies, her own personal experiences and examples of some of the most successful business owners in the world to advance a theory that says there's a better way to get ahead.

And it starts with kindness.

In March, Spaulding -- daughter of local Rotarian Frank Howell and an independent leadership and executive coach based in Austin, Texas -- shared what she had learned about kindness in an article in Forbes magazine under the title "Science Proves Kindness is Your Competitive Advantage."

If she was convinced of her argument before she wrote the story, she came away more convinced than ever after it was published.

"When the article was published, it went viral," she said. "That told me people are really craving kindness in the workplace. It was as if they were saying, 'If you invest in me and see me as a true person with an outside life, I'll embrace you and come alongside you.'"

Studies support that idea, she said.

In one study of 51,000 business leaders, the leaders who were considered most effective were characterized as "kind" or "warm."

Spaulding said she found that to be true in her own career, too.

Early on, she was a finalist for a promotion at her firm. The CEO told her she wouldn't get the job because she was too nice.

"He told me, people would eat me up and that he might, too," she said.

She fumbled through a mild protest, but left the meeting thoroughly disillusioned.

That disappointment, however, led her to a philosophy where kindness was not a liability.

"You have to have boundaries," she said. "That's a big part of the equation."

Establishing boundaries and committing to them enable people to exercise kindness without being run over. Once that balance is established, Spaulding said, the positive benefits of exercising kindness bear fruit, as the studies indicate.

Years later, that refined approach -- kindness plus boundaries -- emerged in another meeting with her CEO. Spaulding had outperformed her peers in sales by a wide margin but learned she was making far less money than her peers.

"My boundaries were crossed," she said. "I was really hurt. I remember thinking, 'I'll ask for what I deserve because this must have just been an oversight.'"

She presented her request to her boss, who passed it along to the CEO. Three weeks later, she said, she was summoned to the CEO's office.

"He didn't even ask me to sit down," she recalled. "He just said, 'You are asking for more money than anybody else in this company. Don't you think that's greedy?' If I had been the 27-year-old I was all those years ago, I would have acquiesced and agreed meekly."

Instead, Spaulding stuck to her boundaries.

"Three weeks later, he brought me in and gave me everything I had asked for and more," she said. "... What I discovered is that kindness is not weakness. It takes a lot of courage and strength to be kind, kind to yourself and kind to others. But I came away from that convinced that we should think of kindness as a leadership skill to be nurtured and cultivated."