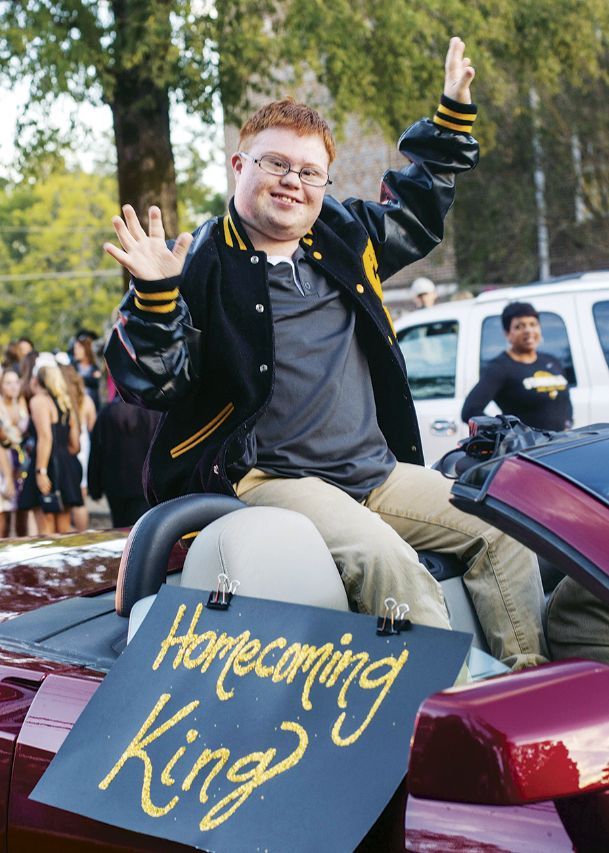 Starkville High School senior Owen Hardin rides in the Homecoming parade in downtown Starkville Thursday after being elected Homecoming King at SHS. Hardin, who has Downâs Syndrome, is the first student elected as homecoming king in several years. Photo by: Laura Daniels/Special to The Dispatch

Owen Hardin's week has seen him treated like royalty.

Those who know the Starkville High School senior say that's only fitting.

Orly Hardin, Owen's mother, said the school's selection is particularly special for the family because Owen has Down's Syndrome.

"I have to say, we've known all along that they've been very accepting of him," she said of Owen's fellow students. "He's been in public schools since kindergarten, and has been with the same group since kindergarten."

Orly said Owen's senior year has been especially important for him, after watching his sister graduate a few years ago. The homecoming selection has put Owen, who she said doesn't always get excited about things, on Cloud 9.

"We found out a few weeks ago that he'd be king and he's been really excited about getting the tuxedo and finding a ride with the parade and getting his picture with the rest of the homecoming court," Orly said. "He gets congratulated all over town. When we're at the soccer fields or at church, people are making a point to come up to him and congratulate him on it."

Owen, in an interview before Thursday's parade, said he was thankful to his mother, father and grandparents. He said he's been most excited about being fitted for and picking up the tuxedo he will wear to tonight's football game.

McDonell said Owen shows up to SHS in a good mood every day and is a "perfect Yellow Jacket." With those qualities, he said it was no surprise to see the students pick him.

Leilah Taylor, a senior maid on the homecoming court, said Owen is a "free-spirited, fun-loving guy."

"It shows that our school does not see him as special needs student," Taylor said. "We see him as a normal person and that anybody can be homecoming king."

Katherine Dumas, another senior maid, said Owen is a pleasure to be around, and his personality lent itself toward the class making the selection.

"Any time you see Owen, he's just a bundle of joy, (whether it's) walking in the hallways, or coming in the office in the morning to talk," Dumas said. "Our class came together and said we thought we should nominate Owen for homecoming king because we thought he was the most deserving. He just really embodies what a true Yellow Jacket is."

'He doesn't meet a stranger'

Orly said the selection is a continuation of strong support from Owen's classmates. She said they've made efforts to continue including Owen in their groups, even after he started to be separated into special education classes after he got to Armstrong Middle School.

Omni Parks is one of Owen's special education teachers and will escort him on the field at this evening's football game. She's also a close friend of the Hardin family and has known Owen since his early childhood when he was at an afterschool program at First Presbyterian Church. They've been attached ever since, Parks said, and she's feels she has become a part of Owen's family, just as he has become a part of hers.

"He's a social butterfly," she said. "He does not meet a stranger. Owen is for sure a hometown celebrity. He's always friendly. He's got that fiery redhead aspect to him, but he's always trying to get someone to smile. He's got enough of a personality to make sure that your day is going great."

Jeff Foster, a longtime friend of the Hardin family, has known Owen all his life. On Thursday, he drove Owen in the homecoming parade. Driving Owen, he said, was an honor.

"This boy is something else," Foster said. "There's not a bad day around Owen. Bad days don't happen when you're around him. I tell people all the time, God makes a bunch of people like Owen to come into your world. Not only that, but God gives special parents to young men like Owen, and he's a good young man because his parents are amazing."

Parks said it's been a joy watching Owen's excitement as homecoming has approached. She said the community's support has been outstanding and is only fitting.

"I'm happy that our school and community have finally placed him in a position of royalty," she said, "because he's been royalty to us for a long time."