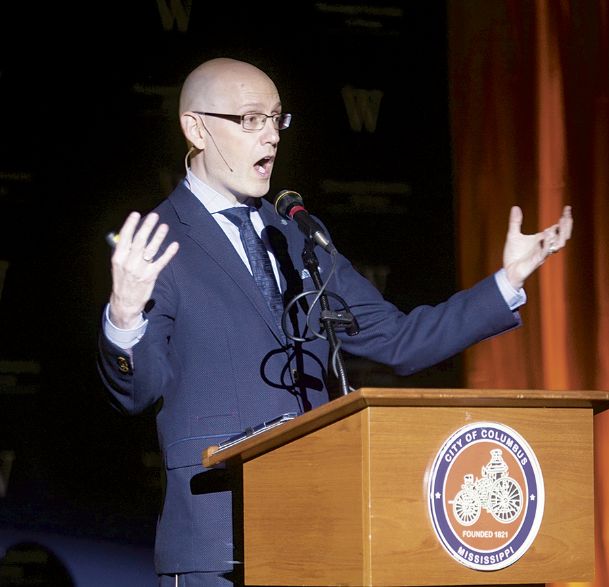 Brad Meltzer, a New York Times best-selling author, addresses his audience during the Eudora Welty Gala, held Friday evening at the Trotter Convention Center in downtown Columbus. Meltzer delivered a message that focused on the power of ordinary people to change the world through building a legacy on helping others. Photo by: Courtesy photo/Chris Jenkins, MUW University Relations

Brad Meltzer is a bestselling author whose work spans genres from nonfiction to mystery, comic books, television and children's books.

His first published novel, completed when he was 27, hit the New York Times Bestsellers list, as have most of his 12 novels. His most recent, "The Escape Artist," debuted at No. 1 on the Times bestseller list earlier this year.

As a comic book writer, he was entrusted with continuing the tales of two of the genre's greatest superheroes -- Superman and Batman. He has dined with presidents and conferred with high-ranking officials from Homeland Security on plans to combat terrorism.

Yet for all his extraordinary achievements, Meltzer focused on the power of the ordinary during his keynote address Friday at the Eudora Welty Gala at the Trotter Center in downtown Columbus.

Meltzer, 48, highlighted this year's gala, a fundraiser Mississippi University for Women hosts during the Eudora Welty Writers' Symposium every year to raise money for scholarships.

Meltzer's message to the gala audience -- that ordinary people change the world -- was a lesson he learned in the infancy of his writing career, which began as an act of panic as much as a plan.

Shortly after graduating from college, Meltzer had been lured to Boston with a job offer, but a week after he arrived, the job fell through.

"I did what anyone does when they face that sort of crisis," he said. "I decided to write a book."

It did not go well, at least not with that first effort.

Meltzer sent his book to 20 publishers.

"I got 24 rejections letters," Meltzer said. "Some publishers sent me two rejection letters, just to make sure I got the message."

The rejection letters only served to strengthen his resolve.

That second book, "The Tenth Justice," became his first published novel and set in motion his career.

"What I realized is that it only takes one person who tells you 'yes,' to change your life," he said. "For me, it was that one editor who said, 'Yes.' Those 24 rejections didn't matter."

'What do you want to be forever?'

Meltzer said the power of one person to change the world relies on how that person sees himself.

That idea first came into focus when a reporter casually mentioned to Meltzer that his work in helping save the Cleveland House, where the first Superman comic was written, would be a part of his obituary.

Intrigued about what the rest of his obituary would someday say, Meltzer hired the reporter to write it. By happenstance, the reporter sent Meltzer an incomplete version of the obit, noting that he had been called off on another assignment before he was able to finish it.

As it turned out, Meltzer said, the abrupt, mid-sentence ending of the obit altered his view of life.

It is also where Meltzer began thinking about the larger purpose of each life.

It's all about what you leave behind, your legacy, he said.

Meltzer said a person's legacy is determined by his or her impact on four groups of people -- family, friends/co-worker/peers, the person's community and, finally, strangers.

He illustrated his point by sharing stories of ordinary people who made profound changes in the lives on others -- from his own parents, whose love and support helped him launch his career, to a ninth-grade English teacher who told him he was a writer. From a little girl with cancer, whose lemonade stand sparked a nation-wide campaign that has raised more than $50 million for cancer research, to a Florida law enforcement officer whose act of kindness to a child with leukemia was the beginning of the Make-A-Wish Foundation.

"The truth is, your job title doesn't mean anything when you die," Meltzer said. "What remains is your resume. That's what you leave behind. That's your legacy.

"All you have to do is help one person," he said. "That's it. That's how ordinary people change the world."