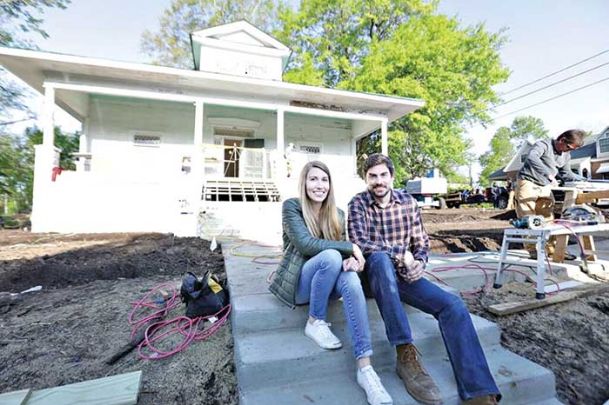 Amanda Kelly and her brother Austin Shafer sit outside a home on Worley Street in Starkville for which they recently led renovations. The work is chronicled on a pilot episode for âHammer to the Manor,â which will premiere Sunday on HGTV. Photo by: Courtesy photo 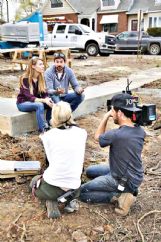 Amanda Kelly and Austin Shafer go through plans to renovate the Worley Street house as cameras roll. Austin said the two were initially nervous about being in front of the cameras but eventually âstarted having fun.â
Photo by: Courtesy photo

For a Starkville brother-sister duo, a series of "wonderfully weird" coincidences will culminate with the premiere of a new home renovation show on HGTV.

Austin Shafer and Amanda Shafer Kelly's show, "Hammer to the Manor," will premiere at 1 p.m. Sunday. The episode, which is a pilot, will focus on the duo's work to oversee the restoration of an 1850s home on Worley Street in downtown Starkville.

Everything started in the summer of 2017, Amanda said, when she and Austin were at Market Beautiful in Laurel. There, they had a chance encounter with an HGTV production representative, who said she liked what the Shafer siblings were about and wanted to get them on camera.

"We had no idea who she was or what that meant, but she ended up being the producer of 'Home Town,'" Austin said. "It ended up just being a strange number of coincidences that brought us to this point."

Austin said they "never in a million years" would have imagined being a part of the show. That led to some nerves as filming began, which quickly gave way to having fun.

"We're not personalities," Austin said. "We're regular people and you don't want to disappoint these people who have seen something in you. So day one, at the beginning, was terrifying. But by the end of the day, we were having a blast."

Amanda said it's been a great family experience, and

"It's been really fun to go behind the scenes and see how a show like this is made," she said. "That's the world a lot of us don't know about--what's on the other side of the TV shows we watch."

Starkville Main Street, in collaboration with Southern Tradition Tailgate, will host a watch party at Fire Station Park on Lampkin Street for the show's premiere.

The watch party is scheduled for noon to 2 p.m. Sunday. Greater Starkville Development Partnership Interim CEO Jennifer Prather said it will include cheese fries from Bin 612, as well as popcorn and hot chocolate.

She said people are encouraged to bring blankets or picnic chairs.

"People have perceptions and ideas in their mind of what small town U.S.A. and the South and Mississippi is," Prather said. "It's such a great opportunity for our area to be put in front of millions of viewers. It's a great marketing opportunity for the city and the state itself, because it makes us be a place that piques people's interest that they may want to visit or even locate to.

"We know we have a great quality of life and a wonderful community," she added. "It gives us an unprecedented chance to share that with the world."

Amanda said HGTV will determine whether to make more episodes of the show based on how the pilot performs. For those who don't go to the watch party, she said it's important to get as many televisions tuned in as possible.

"It depends on how many people are watching and engaged," she said. "That's the big part we want to emphasize in our community -- everyone turn on your TV, your DVR. Every screen counts."

Austin said the show, no matter the result, has been a great chance to display Starkville.

Amanda said HGTV put out a casting call for people with homes to renovate and selected one on Worley Street.

The home had a reputation in Starkville as a "hoarder's house," Amanda said.

"For years, there was a couple that lived there that just had accumulated a lot of stuff," she said. "When the (new) homeowners bought it from them, every room was just full to the ceiling with stuff. You can imagine what the weight of that much stuff in every room did to the home. It really was not very well taken care of.

The entire filming process took eight weeks -- starting in mid-March and ending around the end of May -- with only six weeks to renovate the home.

Amanda said it's "unheard of" to finish a project with that much work so quickly, and she credited the contractors, including Starkville's Byrum Construction, for putting in tireless work to make the renovations happen. She said the various phases of renovation occurred simultaneously to expedite the process.

Austin also credited the homeowners, MSU employees Tom and Brooke Lammert, who decided to renovate the home after purchasing it.

"I thought it was something that could easily take six months to a year and we had to get this tackled in six weeks," Austin said. "Ninety-five percent of people would've knocked that house to the ground. But Brooke and Tom saw something. They loved that home and wanted to make that their family home. Once we saw how excited they were about the project, we really got fired up, and I could not be more proud of the end result."