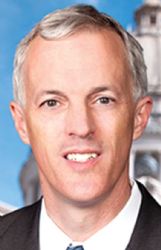 JACKSON -- A Mississippi state senator says he wants to find ways to remove burdens from the state's voting process, particularly for people who cast absentee ballots.

Democrat David Blount of Jackson is vice chairman of the Senate Elections Committee. He says he intends to propose changes during the 2019 legislative session, which begins in January.

The record of the past several years, though, shows that legislators are generally reluctant to change Mississippi's voting laws.

Blount said in a recent interview that the current round of runoff elections brings attention to the challenges of absentee voting. The general election was Nov. 6, and runoffs for one U.S. Senate seat, some judicial posts and two state House seats are this Tuesday.

"We should also allow for one application to cover both the first election and the runoff," Blount said.

Absentee ballot applications and absentee ballots that are returned by mail both have to be stamped by a notary public. Finding a notary can be difficult, and in some places, there is a fee to have a document notarized. Blount said this step is burdensome.

"The notary requirement needs to be eliminated," he said.

Many states allow early voting. Mississippi allows it only for specific reasons , such as if a voter will be out of his or her home county on election day. Any voter 65 or older may also go to a circuit clerk's office to cast an in-person ballot before Election Day.

In 2017, the Mississippi House passed a bill that would have allowed no-excuses, in-person early voting at a circuit clerk's office starting 14 days before an election. That bill died in the Senate Elections Committee after Chairwoman Sally Doty, a Republican from Brookhaven, noted that Mississippi already has five categories of people who can vote absentee.

"I think we have ample opportunity for people to vote," Doty said then.

"For people who vote in person, we should have early voting and we ought to consider ranked-choice voting," Blount said.

In a race with multiple candidates, ranked choice allows a voter to show which candidate is his or her first, second, third or subsequent preference. Since 2014, Mississippi has used ranked-choice voting for overseas and military voters for federal runoff elections because of the tight timetable in receiving and returning an absentee ballot for the runoffs.

FairVote, a nonpartisan electoral reforms group based in Maryland, says ranked-choice voting "makes democracy more fair and functional," but critics say the system can be confusing.

"With ranked choice voting, voters can rank as many candidates as they want in order of choice," FairVote says on its website . "Candidates do best when they attract a strong core of first-choice support while also reaching out for second and even third choices. When used as an 'instant runoff' to elect a single candidate like a mayor or a governor, (ranked-choice voting) helps elect a candidate that better reflects the support of a majority of voters."