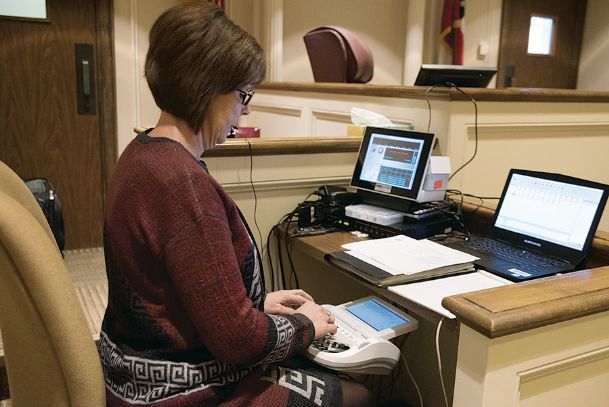 Melissa Grimes works on a stenographer machine at Lowndes County Courthouse on Thursday. She has worked as court reporter for 16 years. Mississippi is working to combat a critical shortage of court reporters entering the field with more awareness and recruiting programs. Photo by: Deanna Robinson/Dispatch Staff

In college athletics, the biggest factor in success is recruiting.

But attracting talented people is not confined to the world of college sports, and when it comes to the field of court reporting, the inability to recruit people to the profession is reaching a near crisis across the country.

The job of court reporter is an essential component to the court system -- courts cannot operate without people to keep the official written record of the proceedings.

Five years ago, an industry study predicted there would be a shortage of more than 5,000 court reporters by this year, and while there are no firm numbers to verify how accurate that prediction was, anecdotally there is evidence of the shortage.

In Kansas, Illinois, South Carolina and Florida, the shortage of court reporters has led to delays of court proceedings. And while court reporters in Mississippi say there is a shortage here, too, it has not yet reached that point.

"In Mississippi, we do have a court reporter assigned to every judge in our judicial districts,'' said LaTonya Allen, president of the Mississippi Court Reporters Association. "That's not to say we don't have shortages, though. It's important to know that there are other areas where court reporters are needed outside of the court system."

A lack of interest, awareness

Melissa Grimes has served as a court reporter in the 14th District Chancery Court since 2002. She is assigned to Chancery Judge Jim Davidson, who will retire at the end of the year.

Grimes began her career in court reporting after graduating with a degree in her field from the University of Mississippi, which ended its program earlier this decade. There is no other court reporting program operating in the state.

She said the demise of the Ole Miss program reflected a decrease in interest in the profession.

"When I started at Ole Miss, there were 42 students in the program and I'd say about 25 stuck with it. I graduated with seven other students."

Grimes said a lack of awareness is a big reason for the shortage.

"It's just one of those jobs that people don't seem to know about," Grimes said. "I know, personally, I would never have thought about being a court reporter if my typing teacher in high school hadn't mentioned that I might want to try it."

There are total of 301 licensed court reporters currently working in the state. For those who work in the state's courts, the annual salary ranges from $49,500 to $64,000 based on years of experience.

"It's a good-paying field," Allen said.

In addition to the pay, Grimes said she likes the hours. Chancery courts work on a Monday through Thursday schedule.

"That's really one of the best parts, the flexibility," Grimes said.

According to the National Court Reporters Association, three quarters of the nation's court reporters are self-employed.

"What a lot of people don't know is that there are so many areas where court reporters are needed," said Grimes, who spent the first 10 years of her career running her own court reporting business, mainly taking depositions.

"It's a great way to have your own business," Allen said. "There so many opportunities. There's CART (computer-aid real-time translation), which is used for the hearing impaired. There is closed-captioning like you see on TV. There are conferences and meetings where transcripts are needed. Really, there are a lot of areas where court reporters are needed. It can be a lucrative, viable job. We just need to do a better job of getting the word out."

Grimes said court reporters are required to type 225 words per minute in the shorthand that is part of the steno machines.

"Other than that, you need to be able to listen well and be able to focus," she said. "It can get pretty crazy sometimes, when attorneys are talking over each other or there are witnesses who are difficult to understand. You also have to be able to control your emotions. Sometimes the testimony can be pretty upsetting, so you have to be able to keep all that in check so you can do your job."

Although Grimes earned a four-year degree in court reporting, most programs today are two-year courses and available through online programs.

At a time when there is some much emphasis on careers that don't require four-year degrees, court reporting isn't getting that same sort of attention.

To remedy that, the National Court Reporters Association has created a program it calls "A-to-Z" to introduce the public to the profession.

The MCRA hopes to launch its A-to-Z program in February, providing free eight-week classes in each of the state's four zones.

To prepare, MCRA members are trying to obtain as many steno machines as possible.

Last month, the Lowndes County Board of Supervisors declared two old steno machines as surplus equipment, which will allow them to be used for the A-to-Z program.

"Right now, we have about six machines," Grimes said. "A lot of them are older machines, but they're useful because the basic key-boarding hasn't changed. We'd like to have 10 machines by the time we start the A-to-Z program because we want to have one machine for every person."

Allen said the A-to-Z program is meant to give recruits an idea of what they're getting into.

"It's kind of a try-before-you-buy thing," she said. "In eight weeks, we'll show people a little about the job, enough for them to have an idea of whether court reporting is right for them. After that, if they are interested, we'll help guide them to online programs and support them anyway we can."