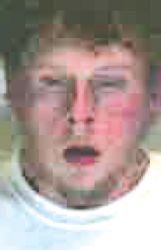 A Columbus man is in custody after he jumped the counter at Taco Bell Sunday and attempted to open the restaurant's cash register.

Officers with Columbus Police Department were called to the Taco Bell just off Highway 45 North a little after 2 p.m. where they arrested Brian Key Gartman, 32, of 513 Hildreth Road, in the parking lot, according to a CPD press release.

Authorities said Gartman was under the influence of illegal drugs when he entered the restaurant and jumped the counter. The press release said Gartman tried to open the restaurant's cash register and, when that failed, attempted to follow several employees into a back office, which was locked.

Multiple customers were in the restaurant at the time of the incident, including one who went outside to his vehicle and retrieved a weapon to help the employees. The press release said the customer "had some interaction with Gartman inside the restaurant" before Gartman went outside where police arrested him as he was trying to escape. Authorities added that while in the patrol vehicle, Gartman attempted to kick out the rear window of the vehicle.

No one was injured in the incident, and no shots were fired.

Gartman has been charged with disorderly conduct at a business, resisting arrest and possession of methamphetamine, according to the press release.

He is currently in Lowndes County Adult Detention Center. His bond has not been set.