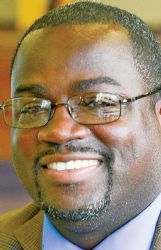 A final decision on whether Columbus Municipal School District's former deputy superintendent Craig Shannon will get his job back will come by the end of the month.

CMSD's board of trustees have set a special-call meeting for 6 p.m. Jan. 29 at Brandon Central Services.

Shannon, who had worked for the district for 10 years, received his termination letter in October from first-year superintendent Cherie Labat. Attorney Dolton McAlpin of Starkville served as hearing officer for Shannon's appeal of his termination in December, and the school board has final authority to either reinstate Shannon or uphold Labat's decision to terminate him.

During the appeal hearing, Labat claimed she did not trust Shannon and had met with him several times to discuss his job performance. Shannon claims he had not been made aware of any issues with his job performance prior to receiving his termination letter.

The Dispatch, through the Mississippi Public Records Act, requested copies of both the termination letter and the appeal hearing transcript. CMSD officials denied those requests, citing the documents are related to a personnel matter and therefore protected from disclosure.

Shannon served as interim superintendent between February 2018, when the district fired former superintendent Philip Hickman, and when Labat was hired in June.