Artesia murders may be related to attempted drug deal 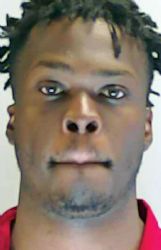 Lowndes County court documents show the man arrested for killing three people in Artesia Tuesday may have been involved in an attempted drug deal.

Clark Earl Allen, Jr., 20, of Oktibbeha County, has been charged with capital murder and felony conspiracy to commit a crime of sale of a controlled substance. The suspect is accused of killing Demario Snell, 31, of Artesia, Mauricio Nance, 22, of Columbus, and Tyshun Fields, 24, of Crawford, in Snell's home at 23 Mobile Dr.

According to arrest affidavits in Lowndes County Justice Court, Allen "attempted to persuade" Snell to "credit" Clark marijuana from him on the day of the murders. However, the documents do not specifically link the alleged attempted drug deal to the murder, nor does it indicate whether Snell cooperated with Allen.

Lowndes County Sheriff's Office Major Greg Wright, who is heading the investigation, confirmed to The Dispatch Friday that the drugs were a factor in the murder, but said the deal may not have been the "concrete motive." He said investigators are still searching the area around the crime scene, learning information about the individuals involved and going over evidence.

Authorities rushed to Snell's home after a neighbor reported hearing shots fired at the address. According to the affidavit, multiple witnesses saw Allen in the area and provided law enforcement with a description of his clothing. Lowndes deputies found Allen in the same area as clothes matching those descriptions and took Allen into custody less than two hours after the shooting was reported.

Allen had his initial appearance in justice court Thursday. Judge Peggy Phillips denied him bond for the capital murder charge and set his bond for the conspiracy charge at $5,000. Allen will remain in custody at Lowndes County Adult Detention Center until his scheduled court day in May.