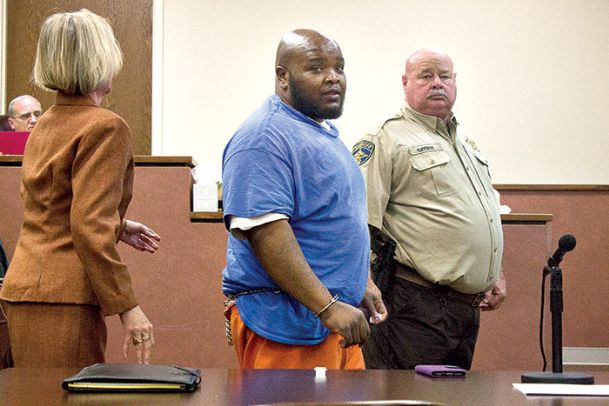 Jerry Talley, center, is escorted out of an Oktibbeha County circuit courtroom after pleading guilty to kidnapping and sexual battery on Monday. Talley is the second suspect to be convicted in a 2016 Cotton District rape case. Photo by: Alex Holloway/Dispatch Staff

Jerry Talley, 32, of McCool, was sentenced to 50 years in prison, with an additional 10 suspended, after he pleaded guilty to kidnapping and sexual battery. Mississippi 16th Circuit Judge Lee Coleman sentenced Talley to 30 years in the Mississippi Department of Corrections for the sexual battery charge and 30 years, with 10 suspended, 20 to serve, for the kidnapping charge. Talley's sentences are to run consecutively.

The case was set to go to trial this week.

Talley is the second convicted suspect in the case, in which he and 44-year-old Terry Hill raped a female Mississippi State University student and robbed a male student in a residence on Maxwell Street before forcing both into a bathroom.

The male victim, according to court documents, was bound with shoelaces and put in a closet during the incident.

Davidson-Brooks said the victims asked Hill and Talley to leave, and they did, before returning and claiming they left their phones. They assaulted the male and female victim upon returning.

Hill was convicted in August 2017 and sentenced to 105 years in prison. Hill's sentence was later extended to 110 years after he escaped from the Oktibbeha County Jail and was apprehended less than 24 hours later.

District Attorney Scott Colom said he's proud of the victims' courage in the case, for testifying in one trial and being prepared to testify in another. He said the lengthy sentences for both men will offer public safety and, hopefully, give the convicted time to consider their actions.

"It's an attack on humanity when you rape somebody," Colom said. "I pray that Terry Hill and Jerry Talley get right with God about what they did and they use these long prison sentences to reflect on the damage they did and what went wrong to allow them to commit such an attack on someone's humanity. Maybe they'll come to grips with what they did and seek forgiveness."

Talley also faced charges of robbery, forcible rape and another kidnapping charge. Colom said they were dropped as part of the plea deal. He said Talley had also faced an aggravated assault charge, which was dropped earlier in the case.

Colom said he was "proud, but not happy," with the case's results and there are no winners in cases such as the Talley/Hill one. Still, he said he hopes the convictions send a message.

"Mr. Talley has now admitted guilt to these crimes and has significantly decreased his appeal rights, if not mostly removed them," Colom said. "The state was willing to offer a plea deal that achieved the goal of giving the victims justice for the crimes that were committed against them.

"It also sends a signal that in Oktibbeha County and the other counties where I'm district attorney, we are not going to tolerate these types of violent crimes," he continued. "If you commit a crime, we're going to do everything in our power to ensure you're imprisoned for a long time."