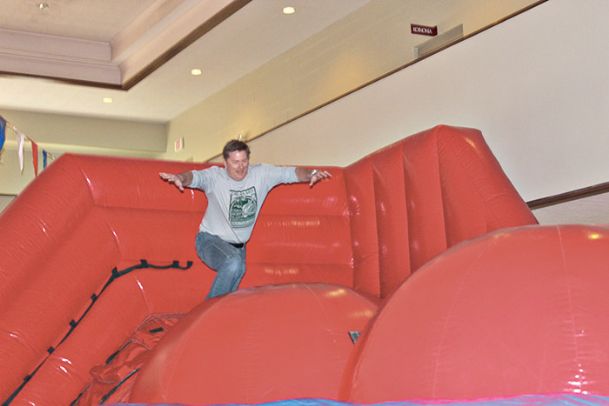 Gerald âBooâ Matthews Jr. leaps in an attempt to make it across the âBig Ballerâ bouncy house at a youth group Super Bowl watch party Sunday in the Starkville First United Methodist Church gymnasium. Matthews is a plant scientist who volunteers with various church functions and even holds a second job as a Starkville-MSU Area Rapid Transit driver. Photo by: Zack Plair/Dispatch Staff

Gerald "Boo" Matthews Jr., who is not a youth but rather describes himself as "not far from retirement," stood on the starting mark ready to tackle the apparatus all the same.

The object of the challenge was to successfully hop across four inflated spheres lined up across the wobbly bouncy house without falling.

Matthews jumped. He bounced hard off the first sphere and fell to the bottom. A few teens who showed up early to help set up the party got it all on cell phone video for posterity.

"That was harder than I thought it would be," Matthews said as he collected himself.

Matthews, the frequent parent volunteer with youth group functions (he has a teen son, Aiden), sums up his contributions with "I just come here and play." He's been a Sunday school teacher, traveled with mission teams at least a half-dozen times, sometimes out of the country, and now is a member of the church's handyman ministry that mostly helps the elderly -- all things that "keep me from sitting around the house," he says.

Even the story of how he got his nickname "Boo" rings of similar self-deprecation.

"I've had it since I was born," Matthews said. "My dad told me that my mom had a hard labor with me and I came out with my face looking kind of mashed. People would come to the hospital and look in the (nursery) window and jump back. So he said since I had the ability to scare people like that, I must have looked like some kind of ghost.

"To my dad's dying day, he said I never improved," he added jokingly.

But if Matthews is "playing" at church, he's definitely working the rest of the time.

Since 1988, he's been a biological scientist with the United States Department of Agriculture Office now stationed at Mississippi State University. Specifically, he breeds corn that is resistant to insects and aflatoxins -- the latter being the lethal biproduct of a fungus.

Last August, he took a second job -- something to prepare for life after retirement -- as a weekend and evening driver for the Starkville-MSU Area Rapid Transit (SMART) system.

The side gig came in handy during a 35-day stint in December and January when a partial federal government shutdown furloughed him from his day job.

"I drove 20 to 30 hours a week during that time," he said. "Having that little bit of extra work definitely helped."

Matthews has shuttled visiting dignitaries, such as U.S. Congressmen and their staffs. He frequently drives the routes to the Golden Triangle Regional Airport or the Starkville Sportsplex. His favorites, he said, are the ones with the most riders because, "I want to have people to talk to. That's what I do best."

Sometimes those are international students or MSU fraternity and sorority members. Other times, it's people in town Matthews has known for decades.

Still, other times, it's the lesser known, but sufficiently interesting, Starkville residents.

"There are some really interesting people here I never knew existed," he said. "This one lady ... got on the bus one time and told me 'If I ever get on here with a skinny tattooed guy and we come to blows, just let us fight it out.' I told her, 'I'm not sure I can do that.'"

That lady rides often, he said, but so far without incident.

Don Fye, also a parent volunteer with the FUMC youth group, said Matthews was one of the first people he met when he moved to Starkville in 1985. They became fast friends, and searching for the words to describe why, Fye also encapsulated a very simply-put motivation for all Matthews does and how he sees the world.