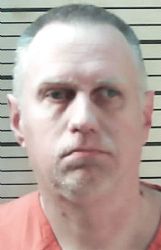 A Dispatch editor has been arrested for exploitation of a child.

Ronald Scott Walters, 47, was arrested by Starkville Police Department Tuesday on an outstanding warrant from Horn Lake Police Department. Walters was the sports editor at The Dispatch at the time of his arrest.

Capt. Joseph Keene with HLPD said his office has two investigators in Starkville related to this case as of Tuesday.

Keene said the victim in the case and his parents reported a sexual assault on Nov. 12. The victim identified Walters, saying he'd met Walters there in Horn Lake.

The Dispatch does not identify victims in sex crimes, but Keene said the juvenile was a male under the age of 18.

Walters had worked as sports reporter at The Dispatch since August 2011 and had been promoted to sports editor earlier this month.

Walters is currently in custody at Oktibbeha County Jail. He will be transferred to Horn Lake, where he will have his initial court appearance later this week.