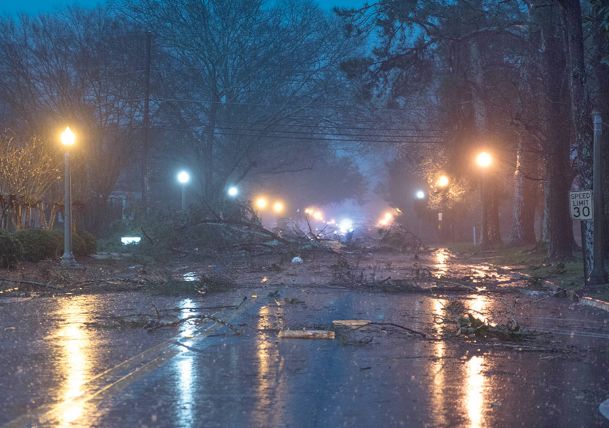 Trees and debris cover College Street after a storm rolled through downtown and East Columbus on Saturday. Photo by: Deanna Robinson/Dispatch Staff

A storm cloud appears in the direction of East Columbus around the same time extensive damage was reported in that area.
Photo by: Courtesy photo/John Fields

At least one person has been killed as a result of a storm that hit Columbus Saturday evening.

Lowndes County Coroner Greg Merchant identified the victim as Ashley Glynell Pounds, 41, of Tupelo. Pounds was one of four people in a Tuscaloosa Road building that collapsed during the storm. She was taken to Baptist Memorial Hospital-Golden Triangle, where she died during surgery, Merchant said.

The storm hit at about 5:15 p.m., destroying multiple buildings and homes, and leaving thousands without power.

The bulk of the damage was in the northeast part of the city, with destruction also on College and Main streets downtown. At least 17 people were taken to the hospital, according to Lowndes County Emergency Management director Cindy Lawrence.

Authorities did not confirm the storm was a tornado by press time but said National Weather Service surveyors would be in Columbus today to determine if one touched down.

"Right now we have a search and rescue team from Columbus as well as Oktibbeha County assisting us, going door to door to make sure there is no one in the houses," Lawrence said in a Facebook video update the night of the storm. "We have a shelter set up at Townsend Community Center."

Lawrence added there have been reports of gas leaks in the damaged areas.

Both Sim Scott Park Community Center and Hunt Success Academy, located on 20th Street North, suffered severe roof damage, and a roof from a business on Tuscaloosa Road was in a nearby tree.

Officials with Lowndes County and the city of Columbus signed an emergency declaration, said Ward 3 Councilman Charlie Box, in whose ward much of the damage occurred. The declaration allows the city and county to receive aid from Mississippi Emergency Management Agency.

"We have people from Starkville Electric, the county and the state up here," Box said. "So we're going to be just fine."

Todd Gale, general manager of Columbus Light and Water, confirmed Baptist Memorial Hospital-Golden Triangle was running on emergency generators and said about 4,700 residents were without power as of 7:30 p.m.

Multiple buildings on and around Gardner Boulevard were damaged or destroyed, including Columbus Fire Service, BJ's Dog Grooming, Wright Automotive and a church building on Tuscaloosa Road believed to be First Pentecostal Church, as well as multiple other homes and businesses.

Hours after the tornado touched down, 20th Street North was still pitch black except for the lights of first responder vehicles and others trying to move through the area.

Power lines and other large chunks of debris -- mostly from the Hunt and Sim Scott roofs -- lay in the road, and one vehicle trying to get through ran over a broken power pole in front of Hunt Gymnasium before police turned the driver around and sent him back the other direction.

Columbus Municipal School District Superintendent Cherie Labat was out of town when the storm hit, and said she would be back Sunday to evaluate structural damage to the Hunt school building, which houses administrative offices and a museum of local African-American history.

Labat also emailed district employees warning them to stay safe and not put themselves in danger trying to look for damage to school buildings and other structures.

"We are hoping and praying that none of (our) students or employees received any damage to their individual homes," Labat said in a text to The Dispatch.

Farther east on and near Gardner Boulevard, vehicles drove over downed power lines and through parking lots to avoid portions of flooded-out roads one to three inches deep in water. Trees had blown through the windows of residences, and on Tuscaloosa Road, multiple businesses were damaged or even utterly destroyed.

On Main Street, parts of which were also filled with debris, people entered gas stations and came out holding bottled water and other goods.

While there was flooding in Artesia, Crawford and other parts of the county, no severe damage was reported there or in Oktibbeha County.

As of press time, no one was staying in the shelter at Townsend, set up by the North Mississippi Red Cross.

"With all the weather coming through, this is going to be a hot spot," NMRC executive director John Brown said.

He added authorities were still trying to get the word out about the shelter.

"It's a tough thing to do without power, but word spreads pretty fast," he said.

Lawrence told residents to be careful checking on neighbors and warned them power would likely stay out until Sunday morning. She added anyone wanting to help with clean-up efforts should call 662-329-5110 starting Sunday.

"We don't want anybody out on the roadways tonight," she said.