Residents rise to the occasion in helping those affected by storm 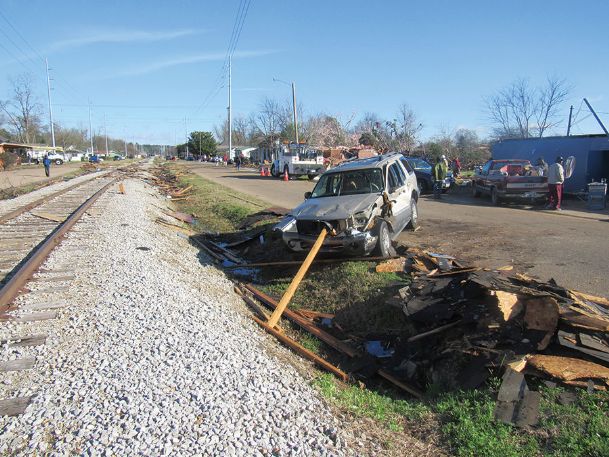 An SUV impaled by a large beam on Railroad Street quickly became a conversation piece Sunday morning. Nearby residents say the driver, a woman, left the SUV uninjured. Photo by: Slim Smith/Dispatch Staff

Outside the Townsend Community Center, East Columbus residents prayed for those affected by Saturday night's tornado. Eleven people were injured and one was confirmed dead.
Photo by: Amanda Lien/Dispatch Staff

As daylight Sunday morning arrived, bright and chilly, the streets in north central and East Columbus began to swell with residents cleaning up their own properties, neighbors from outside the affected areas pitching in as they could and curious on-lookers clogging the streets.

Utility crews, having arrived on the scene after Saturday evening's devastating tornado ripped through parts of the city, continued their work as law enforcement used their cruisers to block traffic where electricity wires lay exposed across the roadways and utility poles dangled precariously over the streets.

Gawkers, who began traversing the streets early on Sunday, navigated a patchwork procession around blocked-off streets, following the course of the storm from downtown, where the damage was sporadic, and east along Seventh Avenue from roughly 14th Street North, past Railroad Street -- where an SUV came to rest at an odd angle in the street, its grill having been skewered by a large wooden beam.

From there, the carnage continued onto 20th Street, where the second floor roof of Hunt Success Academy had been ripped off and every structure at Sim Scott Park had been destroyed.

The damage skipped across to East Columbus, plowing a path of destruction along Tuscaloosa Road that extended almost to the Highway 82/Highway 50 interchange.

Rivers and creeks escaped their boundaries. At the Riverwalk downtown, water from the Tombigee River submerged the Sen. Terry Brown Amphitheater up to the stage, normally 18 feet above the banks in normal conditions. Farther east, about half of Propst Park was under water as the Luxapalila escaped it banks. Although the Hitching Lot Farmers Market was on dry land, the sprawling Columbus Soccer complexed was entirely submerged, with the flood waters expanding beyond Third Street North.

Along Seventh Avenue, two night clubs -- The Blue Moon and Club Elevation -- were reduced to cinder block ruins even as churches in the area -- called The Block by locals -- seemed to have escaped the worst of the storm's fury, a fact that did not go unnnoticed by the faithful.

Some residents, like 23-year-old Reonna Barker, were busy sifting through the storm damage to recover personal items from wrecked homes. Others sat stoically on their porches, watching the scene unfold before them.

The sound of chain saws and heavy equipment were the soundtrack of the day.

In East Columbus, not far from where the storm's furor exhausted itself, 100 or so members of First Pentecostal Church on Tuscaloosa Road, picked through the decimated church, pausing for a 30-minute service that included a baptism service in a hot tub borrowed from Vibrant Church.

Citizens from areas of the city not affected by the storm arrived, too. Jamie McFarland, who lives on 12th Avenue west of the storm's path, passed out 200 sack lunches donated by the Sunflower store on Military Road, as she walked behind a pickup loaded with the food and bottled water maneuvering along the debris-strewn streets.

"I'm not part of any group," McFarland said. "I'm just a neighbor trying to help because I love my community."

In a gravel parking lot across from Carter's Funeral Home on 14th Street North, Davaris Hayes and Jarriel Jones had fired up their grill and were serving hot dogs.

"We came up with this (idea) last night," Jones said. "There's a lot of lights out here. This is our community and we want to feed them."

Hayes looked across the street, at the building across from the funeral home, which had been partially destroyed by the storm. In the distance, he could hear the beeping of equipment as trees and debris were lifted from the street.

"We work right there," he said, pointing to the funeral home building. "And that happened just across the street. God is good. He's real good."

Salvation Army volunteers began setting up long tables with plastic tablecloths, chairs and coolers of soft drinks and bottled water to accompany the food Hayes, Jones and several other Carter's employees and community members had prepared. Jones knew people would come. He was glad of it.

"We want to help," he said. "Times like this, it's easy to feel helpless, but we're not, because we're helping feed the people."

On the unaffected south side of town, North Mississippi Red Cross volunteers bustled around the Townsend Community Center, which was serving as a shelter early Sunday morning, as a family of five, including a teenage daughter on crutches, rested on cots.

The family had evacuated their home in East Columbus around midnight, the mother said, after reports of rising water levels on the roads caused her to fear for her family's safety. They slept the night along with nine other residents who were without power or felt unsafe in their homes.

"I was like, 'if we can't get out with (my daughter) on her crutches, we're in trouble,'" said the mother, who requested The Dispatch not use her name. "I don't know how the house is. I can't get cell phone service to call."

Across the room, volunteers continued to sign in people to the temporary shelter, offering bottled water and snacks, as well as phone numbers residents could call to get emergency assistance.

"This is all just for now," one volunteer said. "We're going to have damage assessment out here pretty soon, but people need help in the meantime."

As the day went on, more vehicles pulled into the gravel parking lot alongside the building. Friends, family and neighbors embraced one another, asked after those they haven't heard from yet, and went into the community center to get food and water. Then, they stayed to see how they could help.

"I'm calling my mom," said one teenage boy, pulling out a cell phone. "We got power, we got extra clothes and shoes and stuff. She could bring them over."

Others seemed to follow his lead. Local residents brought in cardboard boxes and bags of clothes, children's shoes, books and bottled water. Once they dropped off their donations, they gathered in a circle on the side of the building, clasping hands and praying aloud for their friends and neighbors whose homes were damaged, some of them irreparably. Their voices carried over the parking lot into the community center, fading in and out as the door opened and closed with a steady stream of volunteers, donations, and those seeking shelter.

"It's a little bit of peace," said a resident bringing in donations of clothes and water, tilting his head as if to listen. "Hearing that, I mean. God's listening, I know that for a fact."

While their parents prayed, their children waited outside the center, checking in with friends social media and exclaiming over photographs of the damage.

"You see the Riverwalk?" one high schooler asked her friends, showing them a photograph on her phone. "You can't see the sidewalk no more!"

"At least that ain't my house," her younger brother said, shoving his hands into his pockets. The children nodded in agreement.

Then, a white sedan pulled into the parking lot, windows down, bass-heavy music blasting.

"Now it's a party!" someone crowed from inside the center. The kids waiting out front began to dance, phones, Facebook and fears temporarily forgotten.

'We'll save what we can'

"I live right over there," he said, pointing the direction. "It's the house that's under the tree over there."

Across the way, where Eighth Avenue intersects with Railroad Street, Reonna Barker was collecting her belongings from her bedroom, where the south and west walls had been ripped away, right next to the bathroom where she and four relatives, one of them a 5-month-old baby, cowered in the bathtub and the storm smashed the little wood frame home.

"I've never been so scared," Barker said. "I don't know how we made it through, but we did."

Her uncle, Robert Barker, had arrived early Sunday morning with his pick-up and trailer, loading a washer and dryer and box springs and mattresses on to the truck.

"We'll save what we can," he said. "But most of the stuff is damaged."

Like many who live in the area, Reonna is a renter with no renter's insurance.

She'll live with her grandmother for the time being. Beyond that, she has no idea.

"This is all I know to do," she said as she searched through the rubble for her personal belongings.

A middle-aged couple stood near the collapsed Blue Moon nightclub on Seventh Avenue and found a note of optimism in the wreckage.

"I heard they had a party planned for Saturday night," said the man, who didn't want to reveal his name. "If the storm had come three hours later, a lot of people would have been killed in there."

At First Pentecostal, pastor Steve Blaylock offered words of encouragement to his flock as they paused their work to hold an impromptu service.

"I don't know what God's plan is," Blaylock said, "but I do know it will work together for our good. I'll admit it's hard to see the good ending this morning. Our hearts are broken right now. For all these years, this church has been a beacon of hope to our community. That will continue. We're going to buckle down and build something bigger and better."