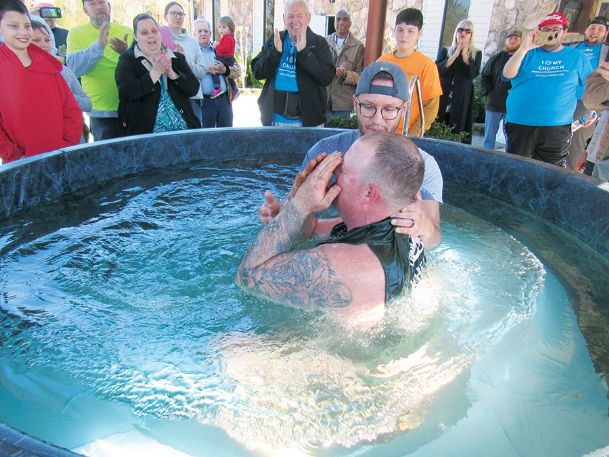 First Pentecostal student pastor Craig Blaylock baptizes Blake Brown, 31, Sunday morning. Brown was one of the group of people who insisted that their baptisms, which had been scheduled for Sunday, continue even after the church was destroyed by Saturday's tornado. "I didn't want to wait," Brown said. "I wanted to wash the old off." Photo by: Slim Smith/Dispatch Staff

Often in great storms, what's left undisturbed is as remarkable as what was destroyed. While most of First Pentecostal Church was turned into a pile of rubble by Saturday's tornado, a small bottle of anointing oil sitting on a wood pulpit was left unmolested. "The pulpit isn't bolted down and it's not heavy," Pastor Steve Blaylock noted. "Little kids have knocked it over by accident."
Photo by: Slim Smith/Dispatch Staff

Pastor Steve Blaylock, right, his wife, Pat, daughter-in-law Lanita and son, Craig, address church members in an impromptu church service next to the ruins of the church which was destroyed by Saturday's tornado.
Photo by: Slim Smith/Dispatch Staff

A group of about 100 members of First Pentecostal Church on Tuscaloosa Road, stopped during their clean-up efforts at their devastated church for a short service, highlighted by a baptism service.
Photo by: Slim Smith/Dispatch Staff

First Pentecostal student pastor Craig Blaylock baptizes 5-year-old Kinsey Lambert Sunday morning as her father, Joseph Lambert, raises his hands in celebration in the background. The church was destroyed by Saturday evening's tornado, but the church proceeded with the planned baptisms anyway, using a portable hot tub provided by Vibrant Church as a baptismal.
Photo by: Slim Smith/Dispatch Staff

Come hell or high water, Blake Brown was going to get baptized Sunday.

Under normal circumstances, that would be easy enough. Steve Blaylock, pastor at First Pentecostal Church on Tuscaloosa Road in East Columbus has baptized hundreds of people in his 22 years at the church.

But pulling off a baptismal service Sunday was no small feat. For starters, the baptistery and the baptism robes were buried somewhere among the scattered debris of the church, which imploded under the power of Saturday evening's tornado.

"We had about four or five baptisms planned," the pastor said. "After we got out here Saturday night and saw how bad it was, I asked the people who were wanting to be baptized if they wanted to wait or if we could use a portable baptismal. They said, 'Let's go ahead and do it because we feel like we need to have a prayer service or something to pull us together so we're not just all broken-hearted.' So we said OK."

Brown, who arrived soon after the storm and worked deep into the night Saturday cleaning up the wreckage of the church, wasn't in the mood to wait.

"We decided (Saturday night) one way or another, we were going to make it happen," he said.

Vibrant Church offered the use of a portable baptistery. Brown picked it up, brought it back and set it up early Sunday morning under a canopy near the west entrance to the ruins of the church.

"I was baptized by my grandfather when I was 8," said Brown, 31. "I've lived a lot of life of sin since then. I didn't want to wait any more. I just wanted to wash that old off."

Dressed in blue jeans and a T-shirt, Brown was the first one in, followed by seven others. The youngest was 5-year-old Kinsley Lambert. Craig Blaylock, the church's student pastor and Steve's son, performed the baptisms.

Craig Blaylock explained to the child how the baptism would go, advising her to hold her nose as he plunged her beneath the warm water.

"I can go under without holding my nose," Lambert said proudly, eliciting a laugh from Craig.

Lambert nodded in agreement and the service continued.

Normally, First Pentecostal has a regular attendance of about 100.

There were probably that many at the church Sunday morning, dressed not in the Sunday best, but in work clothes. Many had arrived at first light to help salvage what could be saved. The impromptu service -- a few words from Steve followed by a chorus of "How Great Thou Art," a prayer offered by Pat Blaylock, Steve's wife, and the baptisms -- started at 11:15 and lasted no more than 30 minutes. Church members then quietly resumed their clean-up work.

Steve Blaylock expects the church to be a total loss, so he'll be scrambling to find a location for church services for an extended period.

"We'll have to see if they condemn the whole building as unsafe," he said. "If they don't, we'll probably try to set up in our fellowship hall. If it's condemned, we'll be looking to see what's available. We've had several churches in the area offer to let us use their facilities."

As the clean-up began Saturday night, workers noticed something in the midst of the wreckage that always seems to happen during major storms: What is left undisturbed is as remarkable as what is destroyed.

Most everything at First Pentecostal Church seemed to be a total loss.

An "evangelist quarters" on the church's south end used as lodging by visiting missionaries, was demolished, and the roof of the sanctuary had been ripped off, with large chunks of insulation and twisted metal falling onto the church pews. The south and west walls of the church were a collection of crumbled cinder blocks.

But in the middle of the sanctuary, a small bottle of anointing oil sat on wooden pulpit, seemingly untouched by the fury of the storm.

"The pulpit isn't bolted down and it's not heavy," Steve Blaylock noted. "We've had little kids knock it over by accident. It doesn't look like it moved even a inch. Maybe that's a sign."

For 79-year-old congregant Freddie Lindsey, there was another even more important sign.

Lindsey and her husband, Tommy, had to evacuate their home in the face of the rising waters of the Tombigbee River on Friday. Steve Blaylock suggested the couple stay in the evangelist quarters, but at the last moment they decided to stay with Freddie's sister instead.

Freddie sat in folding chair during the service and seemed unfazed by the destruction or even her own close call.