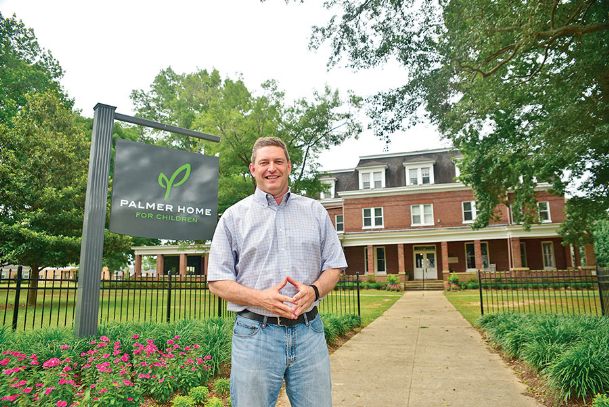 Palmer Home for Children CEO Drake Bassett stands in front of the Columbus residential foster care facility in this 2015 Dispatch file photo. The organization has announced it is moving the children housed there to its Hernando campus. Administrative offices will remain in Columbus. Photo by: Dispatch file photo

Palmer Home for Children has announced it will move the children in its residential program from its Columbus campus to its Hernando campus in June.

Palmer Home CEO and President Drake Bassett stressed the faith-based nonprofit -- which has been a home for children in need for more than 120 years -- is not leaving Columbus. Administrative, marketing and financial offices will remain in Columbus, and all the organization's thrift stores will remain in place. He said the 30 children currently living at the Columbus campus will finish out the school year and then move to Hernando by June 30.

The move is part of an overall restructuring of the organization, which Bassett said will help expand the services Palmer Home offers and will hopefully increase the number of children it serves.

"We're not saying goodbye to anything. We're not leaving," Bassett said. "It's none of that. It's about building on top of. We can only do this because of what's been there for 120 years. And now we're in a position to do more."

The organization will shift its focus from primarily a residential program housing children who cannot live with their parents or other family to a focus on four programs: residential, foster care, transitional coaching for ages 18-24 and respite care for child victims of sex trafficking. The move is about allocating resources to support the new structure, Bassett said.

Palmer Home's board of trustees has been considering the move for several months, Bassett said, but it officially voted to move the campus Thursday.

"Our board decision was carefully evaluated, prayerfully considered, and we unanimously concluded that our organization's greatest responsibility is to serve more children and serve them well," Palmer Home Board Chairman Alan Walters said. "Care for the children has become more complex. ... One size fits all does not work anymore. Our motivation and decision and drive was to do what is best for the children."

Bassett said despite the move from Palmer Home's historic campus, the organization's core mission to help children will be the same.

"This is a tough decision to bring residential to one campus and not use the other," he said "... But when you step back and say, 'But look, when we do that, then we can do this and we can serve more children' and that's reality ... that's our core mission."

Palmer Home was established in 1895 and built on 110 acres in south Columbus in 1898, the year the first child was admitted. Over the years, it added cottages where the children live, as well as a gymnasium, a barn and greenhouses.

The Golden Triangle has been the hub for fundraisers and events from soirees and symphony concerts to tailgating parties at Mississippi State University and the annual sale of Palmer Home's home-grown poinsettias every Christmas.

Bassett said while the Golden Triangle doesn't provide the majority of monetary donations, it does have the largest number of donors to Palmer Home.

Palmer Home has also recruited volunteers from the area. Bassett said it's common for him to run into volunteers or alumni at businesses around town, and plenty of Columbus residents have told him they remember going to school with children from Palmer Home.

The organization began expanding in 1990 with the purchase of 150 acres in Hernando just south of Memphis, Tennessee. The first cottages on that property were built in 2003. Since then, Bassett said, the campus has expanded to six cottages with plans to break ground on a new wellness center, which will house counseling offices and a full-time school, later this year.

The Hernando campus, which is in a rural area rather than in the middle of a city, is a better fit for Palmer Home's new model, Bassett said. The buildings there are newer and require less upkeep and the property is secured. There is also room for more construction.

"Our current campus doesn't allow us to build," he said. "The property behind us is covered in floodplain. We've looked at that, and we just don't have space there to actually build out. The second part is we do have some aging buildings that need repair and need investment. And third, in general, it's about access to resources. So whether it's personnel or people or things, we feel like we can access the larger market up there for some of the things we need."

Walters stressed that the city of Columbus has always been easy to work with and attentive to Palmer Home's needs.

"The city and the relationship has been great and the decision is certainly not because of anything negative about that relationship," he said.

He added that many of the fundraisers and events, such as tailgating at MSU, will continue in the Golden Triangle.

"Our hope and desire is to keep as much of that community and regional connection as possible," he said.

Bassett said Palmer Home will keep the Columbus campus and hopefully lease it or offer it for use of other ministries, such as a recovery center. If there is no interest from area nonprofits, he said, Palmer Home may consider commercial alternatives.

"Our first priority is to use the property the way it was intended from the very beginning," he said.

Palmer Home began focusing on foster care in 2014 when it partnered with Tennessee-based nonprofit Jonah's Journey, which helps find homes for children with incarcerated mothers. Within a few years, Palmer Home was recruiting and training foster parents in Columbus.

"In the future we would see ourselves serving close to 100 residential and 200 in foster care," he said. "Those are the targets. That's 300 people and it can go higher."

To fully implement foster care, Palmer Home plans to hire case workers who will work out of the Columbus office.

Right now Palmer Home is licensed to place foster children in Mississippi and Tennessee and is working toward being licensed in Alabama.

Another program already partially in place is the transitional coaching program, which aids Palmer Home children once they've turned 18. At least 10 students who grew up in Palmer Home will be in college next year, Bassett said, and there are several others who have joined the military or gone straight to the work force.

Bassett wants to hire a team to work with those kids as they begin adult life.

"We don't want them to age out," Bassett said. "We don't have our own children age out. They accept responsibilities, but we help them. That's the same concept. Coach them, teach them, work with them, give them a point of reference, stay close to them."

The last program Palmer Home officials want to implement will focus on aiding children who have been rescued from sex trafficking situations -- circumstances which require specialized care, Bassett said.

"It's sort of a crisis-oriented situation," Bassett said. "You need safety, you need stability and you need evaluation. You need to figure out where is this child physically, emotionally. And that respite period can be anywhere from three to six months. During that time, you start looking for a more permanent program."

"That way if a child is removed from a trafficking situation, there would be a place to go to tonight," he said.