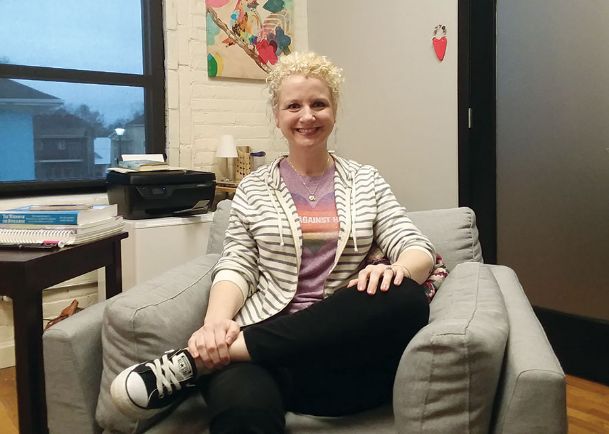 Karla Morgan, who owns Seeds Counseling and Wellness, parlayed a broadcasting background into helping her clients "find their voices." Her specialty is talking to middle school-aged children. Photo by: Isabelle Altman/Dispatch Staff

Of course, what that's looked like has varied over the years, said Morgan, a licensed counselor who opened her own private practice, Seeds Counseling and Wellness, in Starkville four years ago.

In college at Mississippi State University where she was a broadcast journalism major, it was news reporting. But even before her six months at a radio station following graduation were up, Morgan was already thinking there might be another career that was a better fit for her.

She went back to MSU and received a degree in school counseling. For the next nine years, she worked at Starkville School District, first at Sudduth Elementary and then at Armstrong Middle School. She found she was particularly able to connect with the middle school students, who would have heart-to-hearts with her.

"That's when I started to think, 'Think of what I could do if I had a full hour to be with these kids one-on-one and I didn't have any distractions,'" Morgan said. "That's what sparked my interest in going into private practice."

When she left to open her own practice, first out of Methodist churches in Starkville and Columbus, and later to her office in downtown Starkville, she immediately began to branch out even more, working with children and adults from all walks of life and with all kinds of stories.

From pre-teens to MSU students, from to LGBT (lesbian, gay, bisexual, transgender) individuals to those struggling with substance abuse, Morgan feels there aren't many issues she hasn't dealt with in some form.

The most common theme, she said, is trauma -- something she said almost everyone suffers with, though the symptoms manifest differently from person to person.

Unlike psychiatrists, Morgan doesn't prescribe medicine. Her counseling sessions are instead a conversation between her and her clients, with her offering coping mechanisms and different types of therapy depending on the issue.

Of course, she said, in a small town like Starkville, she has to be extra careful with client confidentiality.

"That's something I discuss with all my clients," she said. "'Hey, odds are we're going to see each other at Kroger. How do you want to handle that? Do you want to tell me hi or not? It's totally up to you.' Some people will run up and give me a hug and some people (don't). And that's fine. My goal is to always make my clients feel comfortable, in the session and outside the session."

Meeting such a variety of people has opened Morgan's eyes the types of struggles people in her community have, even softening her feelings toward issues which she said she didn't have compassion for when she first began studying to be a counselor.

"My clients have helped me learn and grow," she said. "They are my greatest teachers, I feel like. They're living their lives and experiencing things from a point of view that I am not. That's what I tell all of them at the beginning. 'You're the expert on your life and your feelings and experiences and I am here for that because I can't do anything without that.'"

What she can do, she said, is offer them hope. Though she doesn't talk about it much, Morgan faced her own struggles with anxiety and depression about 10 years ago. Sometimes when she talks with a client in similar circumstances, she shares that experience with them.

"When you're in that position, that's enough to start with," she added. "If you can just believe there's a possibility that there's hope. ... Because some people are so convinced that there absolutely is no hope and they're going to feel like that forever. To have someone say, 'Look, it's going to be hard and I'm not going to tell you that it's going to be easy and I can't tell you when and I honestly don't even know how, but I believe if we work together there can be hope.'"

Morgan described her job as helping clients "find their voice" -- which is what she wanted to do when she first pursued journalism in college.

"I'm blessed that I get to be involved in people's lives in the way that I am," she said. "It's something that I really wanted to do and I'm very glad that I get to do it."