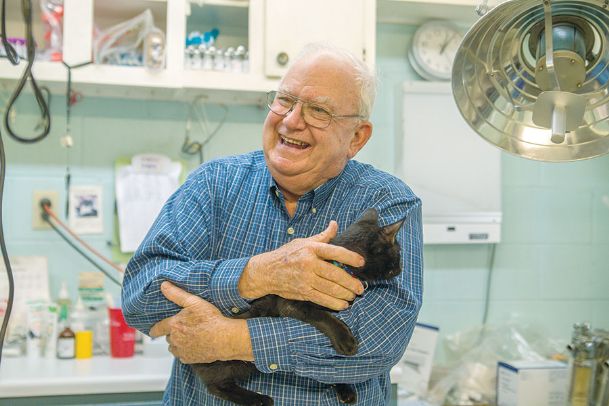 Columbus veterinarian Cecil Boswell gives a cat named Denzel an examination at Boswell's Animal Clinic. Boswell, 77, has been in practice for 44 years and says his profession has changed dramatically over the years. Photo by: Chris McDill/Special to The Dispatch

When Cecil Boswell graduated from veterinary school, the profession was much different than the veterinary medicine he practices today.

"It has already started to change when I got out of vet school," said Boswell, who opened Boswell's Animal Clinic on Highway 45 North in Columbus in 1984 and has been a vet since 1975.

Back then, Boswell said, vets used senses, instincts and experience to diagnose a sick animal.

"I was in vet school at Auburn, sitting in a class one day," Boswell said. "The professor was talking to us and someone was leading a cow down the hall outside the classroom. The professor stopped, listened for a second and told us what was wrong with the cow. He knew it by the sound of the cow's walk."

Today, veterinarians rely on technology such as x-rays, sonograms and CT scans, eliminating much of the guesswork.

Even so, after 44 years of practice, Boswell still uses his hards, his ears and experience gained from decades in the profession to diagnosis a sick animal. In most cases, the technology is used to confirm his opinion.

Now 77, Boswell has made a few concessions to age.

"I stopped doing the large animals -- horses, livestock -- in the late '90s," he said. "I was getting too old and too tired of getting pushed around and kicked across the room."

He still goes to work every day and he still performs all of the surgeries at the clinic, leaving the other duties to the two other veterinarians -- Jennifer Wilcutt-Benson and Bonnie Blake.

Blake, who has been at the clinic since it opened, said working with Boswell is a pleasure.

"He's just a real nice person, easy to get along with and easy to work with," Blake said. "As a surgeon, he takes his time. He's very careful and an excellent surgeon."

Technology isn't the only change Boswell has seen in the profession over the past 44 years.

Of course, some things haven't changed, among them the importance of knowing the right question to ask when examining an animal.

To illustrate the point, Boswell recalled a farm visit he made early in his practice.

An elderly couple had a sick cow and summoned Boswell out to take a look.

"When I got there, the woman calls out, 'Mr. Ray, come take Dr. Boswell out to see the cow,'" Boswell said.

Mr. Ray led Boswell to the barn and after examining the cow, Boswell could see the cow was "off her feed" and ailing, although he couldn't pinpoint the cause.

Boswell treated the cow with antibiotics. Two days later, he returned, but the cow still hadn't improved. After changing the antibiotics, Boswell told the couple to call him in a couple of days. It was about all he could do.

Two days later, the lady called Boswell to report the cow had died and asked him to come out and perform an autopsy to learn the nature of the cow's mysterious illness.

"When I go out there, Mr. Ray hooked up the cow to the back of his pickup truck and drug him way out across to road to where he wanted to bury the cow," Boswell said.

"So I got the cow all opened up and started feeling around, examining his organs. I could see there was part of the cow's intestines that weren't right, but nothing that would have killed it.

"Well, I'm still feeling around, looking at this cow," he added. "Mr. Ray is just standing there, watching. Finally, Mr. Ray says, 'You don't think it died because I shot him, do you?'

"It turns out, he has shot the cow, trying to get him back in the barn," Boswell said. "I had felt the cow's hide, but it's pretty tough. I hadn't felt all the birdshot."

Mr. Ray then pleaded with Boswell not to tell his wife.

"So I get back to the house and, sure enough, she wants to know what killed the cow," Boswell said.

Boswell gave her a verdict that wouldn't implicate Mr. Ray.