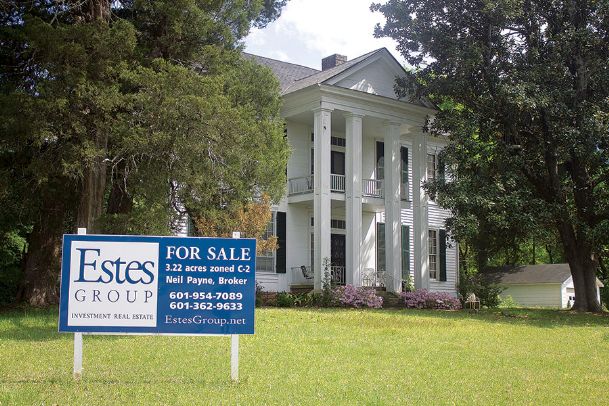 A company is considering purchasing the site of the Gillespie-Jackson House for a commercial/condo development. The house, which sits at the corner of Louisville Street and Highway 12, was built in 1850 and has been listed as for sale since 2017. Photo by: Alex Holloway/Dispatch Staff

Charles T. Carter, with Georgia-based Camson Development Company, talks about a proposed development at the site of the Gillespie-Jackson House during a Development Review Committee meeting. Carter's company has not yet made a formal offer for the property.
Photo by: Alex Holloway/Dispatch Staff 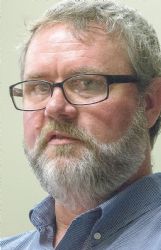 STARKVILLE -- A potential development is eyeing a lot on the corner of Louisville Street and Highway 12 where one of the city's oldest homes now sits.

Charles T. Carter, a developer with Marietta, Georgia-based Camson Development Company, spoke to Starkville's Development Review Committee on Thursday. Camson Development is considering a development that would -- while details are currently scarce -- bring commercial property and condos to the site of the Gillespie-Jackson House.

In order to build the new development, the Gillespie-Jackson house would have to be removed from the site -- whether through relocation or demolition.

Thursday's meeting primarily focused on the technical aspects of the development -- engineering work, fire and garbage truck access, ingress and egress -- and City Planner Daniel Havelin said the city hasn't received a formal application for the project yet.

Carter said he hoped for Thursday's meeting to be primarily informational. He declined to comment further to The Dispatch after the meeting, saying the project was still too early in conception and hasn't been finalized yet.

During the meeting, he said Camson Development has not yet purchased the property.

"We don't have a contract yet," Carter said. "I want to meet with you (the DRC) first and do some more work before deciding what's the best use, what's the most economically feasible use of the property to develop it."

Neil Payne, a broker with the Jackson-based Estes Group real estate company, is working with the Mosley family to sell the property. Payne, speaking to The Dispatch on behalf of the family, said he was surprised to hear there are already plans for what to do with the property.

"It's curious that someone would be talking to the city when we don't have an offer on the table yet," he said.

Payne said he's not spoken directly to Camson Development and is only aware of their interest in the property through a real estate agent out of Tupelo.

The Gillespie-Jackson House has been on the market since fall 2017 -- originally listed by California-based Marcus and Millichap Real Estate for $2.1 million.

The house and the 3.32-acre property it sits on are now listed for $1.9 million, according to the Estes Group website.

The Gillespie-Jackson House is currently vacant. It's owned by Joe T. Mosley, according to county parcel maps.

The Gillespie-Jackson house was built in 1850 for Dr. William Gage Gillespie, a physician who came to Oktibbeha County in the 1830s. It was added to the National Register for Historic Places in 1986.

However, during the meeting, Havelin pointed out that alone does not protect the home from demolition, and it does not have any local protection because it doesn't sit in a city-designated historic district. It's also not considered a state landmark.

Still, Havelin warned Carter that demolition of the home will likely generate pushback from the community and encouraged Carter to seek some way to preserve the home.

"It's going to be a big deal, so be prepared for that," he added. "Any attempt to mitigate that at all would be appreciated. Moving it, offering stuff up to be moved out of it -- something."

Havelin said Starkville has lost four old homes in the last few years -- three near downtown, where the Midtown development has since been built, and one at the intersection of Louisville Street and Gillespie Street, where new residential buildings are going to be built.

He said those homes generated concern among the citizens. Removing the Gillespie-Jackson House, he said, will likely generate more.

"The four houses that were removed were nowhere near as historic or as old as this one, or as prominent," Havelin said. "... We started getting calls and comments as soon as the sign went up."

Carter said he has been informed that the Mosley family will determine what to do with the home.

"The property owners said they'd take care of it," Carter said. "They said they would deal with the house or remove the house."

Payne said the Mosley family has sought to find someone to move the house, rather than demolish it. Those efforts have, so far, proved fruitless. He said the family would consider demolition if needed, but would still prefer to move the house.

"The family would give the house away to be moved for $1 if someone would do it," he said. "So far, nobody has come to do that."