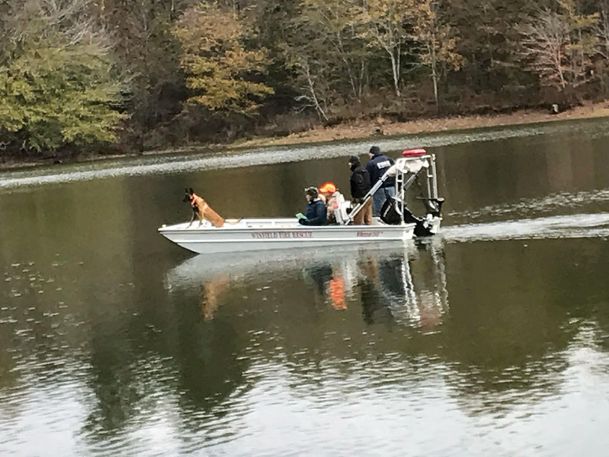 Zor, a Belgian Malinois with GTR K9 Search Team, assists law enforcement in solving a cold case in Alabama in December 2018. Zor is one of several search dogs trained by the Columbus-based nonprofit. Photo by: Courtesy photo

Paulette Weible says her hound dog Bella is a "leader."

So much so that when the six-year-old search dog was looking for a missing person in Columbus on Thursday, she would stop moving every time the police officer walking with her got in front of them to stop traffic.

"She'd look at him like, 'Do you want my harness on you so you can put your nose to work?' until he backed off so she could be lead," Weible said laughing. "...She does that with all the cops. She would just look at them like, 'I'm not moving until you get out of my way.'"

Bella, who has been a search dog for five years, is one of nine search dogs that Weible and her husband, Bob, use to aid in missing persons cases and criminal investigations in their Memphis, Tennessee-based nonprofit Search Dog South. The couple and the organization's other dog handlers are called on to assist law enforcement and other government organizations in looking for individuals, from missing postal workers to suspects on the run.

Paulette said each dog is called on 90 to 100 times per year, usually within a 250-mile radius of Memphis. She added the nonprofit is run totally on donations and that neither law enforcement nor families of missing people ever pay the organization for the services of the dogs and their handlers.

While Tupelo Police Department had called in the Weibles to help look for a Tupelo missing man who had been seen in Columbus, departments in Lowndes County usually work with Kathy Doty, who runs GTR K9 Search Team in Columbus.

Doty has been training search and cadaver dogs since 2000. Those include Columbus Fire and Rescue's two search dogs, Jett, a Belgian Malinois, and soon-to-be-certified Mack, a McNab Shepherd; and her dogs have been called in to assist in searches for missing people, including by Columbus Police Department for a missing autistic man in January 2018. The man was found safe a few days after being declared missing.

"Every single case we treat as an active case ... with the utmost care, as a crime scene," Doty said.

In order to be certified, search dogs and their handlers train for months so they can work together and so the dogs can detect certain smells.

"They're natural hunters," said Bob Weible. "It's what a dog's all about, and we use that skill that they have to hunt to find a missing person. The fact that they're hunters. We just direct what they hunt for and where they do it."

When looking for a missing person, like Bella was on Thursday, handlers try to locate a particular object -- ideally a piece of clothing, while Doty suggested a shoe or rear-view mirror -- that has the individual's scent on it. Ideally the dog can then follow the scent, if not to the individual then at least to some kind of evidence showing where the person was and where they may have gone.

"We basically teach them to work until we tell them to stop or until they find the person," Bob said.

The dogs can even rule out other scents by smelling people and things that would have been around the missing individual, he added. That way they know what scents not to follow.

How successful they are depends on many factors, from the weather to how old the trail is.

It's a little different for cadaver dogs, which is what Doty specializes in. Rather than picking up on the scene of a specific, living person, her dogs know the smells of a decomposing body.

"It can get pretty gruesome," she said.

She's usually called out after natural disasters, she said, adding that earlier this year she took her dogs to an area of Alabama where severe tornadoes had gone through the area, and there were lots of missing people.

She typically is called out most often when boating season and hunting season begins, she said, because those and other outdoor activities cause accidents and sometimes disappearances.

The search for bodies in particular can be pretty harrowing, Doty said -- she remembered spending five days in Louisville finding pieces of remains after a tornado went through five years ago -- but she hopes it brings closure to the families.

"I couldn't imagine having somebody that's been missing and they never know where they're at," she said. "So even though it's sad, in a way they can finally have peace of mind and rejoice and give closure to that."

For the Weibles, it's the same way.

"I like putting people back with their families, but when someone is murdered and you work your dog to help find who did it, that to me is really something, because there's justice for that person," Paulette said. "That's special too."