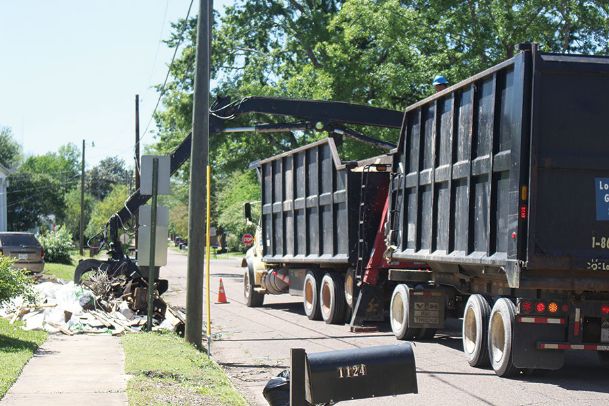 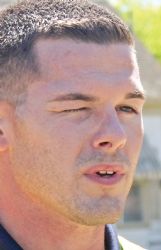 Contractors responsible for storm debris removal in Columbus following a Feb. 23 tornado estimate pickup will be completed by this weekend.

During a press conference held by the city, Noah Frederick, a supervisor with Looks Great Services, the Columbia-based debris removal company that began work in the city last week, said crews continue to make rounds throughout the city.

"We feel like we're coming to the end here," he said. "We've picked up about a million pounds of debris. ... Looking at the streets, we feel like we could be finished by this weekend, which would be good, it being Easter and all."

The completion time is conditional on debris being accessible to Looks Great trucks and crews, Frederick said. Since city-contracted companies are not allowed on private property, workers can only collect what is left on curbside rights-of-way.

"We really want people to move whatever it is they have to the right-of-way," he said. "We want to pick it up. We don't want to leave without having taken everything to the landfill. But we can't go on private property.

"People don't need to call into the city," he added. "We will come and get the debris if it's on the right of way. It might not happen immediately, but we will get to you."

Frederick said Debris Tech, an Atlanta-based debris monitoring firm the city hired to produce documentation for potential federal reimbursement, is following the crews to document the amount of debris collected. If the president signs an emergency declaration for the city, that documentation will help Columbus receive reimbursement for the cleanup efforts.

City councilmen and Mayor Robert Smith originally planned to wait until the federal emergency declaration was signed before authorizing the beginning of cleanup in order to ensure both companies would be reimbursed by Federal Emergency Management Agency. However, concerns about vermin living in piles of debris motivated them to give Debris Tech and Looks Great a notice to proceed. Those notices are not contractual, and neither company will bill the city until a national declaration is signed.

In a statement posted on Facebook, Smith wrote city officials are "very pleased" with the pace of the cleanup.

"Both companies are doing excellent work for our citizens," he added.

In an email to The Dispatch, FEMA officials said they are unsure if, or when, a declaration will be signed. Mississippi Emergency Management Agency Director of External Affairs Ray Coleman said, in his experience, the wait for a signed federal declaration can be as short as a week or as long as three months.

"At this point, no one really knows," he said. "It's up to the president now."

U.S. Rep. Trent Kelly and Sen. Roger Wicker (both Republicans representing Mississippi) did not return requests for comment on the status of the emergency declaration or the extent of their advocacy efforts toward getting one signed.

If a declaration is signed, FEMA will reimburse the city 75 percent of cleanup costs and MEMA will pitch in 12.5 percent. The city will absorb the remaining 12.5 percent.