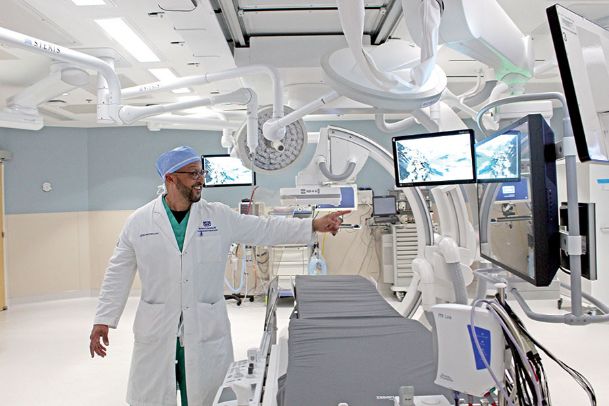 Cardiovascular surgeon Richard Eubanks gestures to one of several monitors on Monday in the Hybrid Operating Room at Baptist Memorial Hospital-Golden Triangle where surgeons can see live feeds of their procedures or of x-rays. In the adjacent room, technicians, doctors and nurses in training can also watch those feeds. Photo by: Amanda Lien/Dispatch Staff

The C-shaped x-ray device in Baptist Memorial Hospital-Golden Triangle's Hybrid Operating Room will provide surgeons with a live feed of a patient's body during the procedure. The design is meant to make more surgeries minimally-invasive by eliminating the need to cut a patient open.
Photo by: Amanda Lien/Dispatch Staff

The 1,000-square-foot Hybrid Operating Room technology includes a C-shaped x-ray machine that provides surgeons with a live feed of a surgery patient, an independent cooling system and generator in case of power outages and a separate observation room. The $1.3 million setup is meant to increase the number of minimally-invasive procedures BMH surgeons can perform.

"For surgeries, surgeons can use that live x-ray feed to make several small incisions wherever it is they need to instead of needing to do an open procedure where the patient is cut fully or partially open," said Derrick Forrester, director of perioperative services "... It helps us see much better and clearer what's going on inside a patient without having to be so invasive.

"That x-ray (machine) is what makes this what we call a 'hybrid' operating room," he added. "But if we have a situation where a procedure goes from minimally invasive to, say, open-heart surgery, we have all the equipment in here too, which is also why we call it a 'hybrid' OR."

Surgeons will be able to use the room for procedures starting May 20, Forrester said. Cardiac surgeons are expected to use it the most since their procedures are often extremely delicate and nuanced, he added, so they would benefit from having access to a live x-ray screen.

"They could perform what we call 'standard procedures' like (coronary) bypass surgery with just some incisions," Forrester said. "They could also replace the valve in your heart without having to cut you open."

The Hybrid OR was built over a period of roughly 18 months, Forrester said. The first step was to complete special renovations to the operating room that would enable the floor and ceiling to bear the weight of the heavy equipment.

"We ended up having to mount some of the equipment to the floor instead of the ceiling because the ceiling just wasn't able to handle all the weight," he said.

The total cost of the construction and equipment was somewhere between $4 or $5 million, Forrester estimated.

"We tried to integrate all the equipment into this space so we could have a place for training, enough area to move around in and make sure we had that generator for if there's another tornado," he said. "It's pretty amazing we were able to get it all in there."

The Hybrid OR also may help expand the scope of surgeries BMH will be able to offer, added cardiovascular surgeon Richard Eubanks.

"We have the ability for more complex procedures that could become less disruptive to the patient," he said. "We're able to do smaller incisions now, which means quicker recovery, quicker outpatient care ... and a quicker return to daily life. That's the goal here."