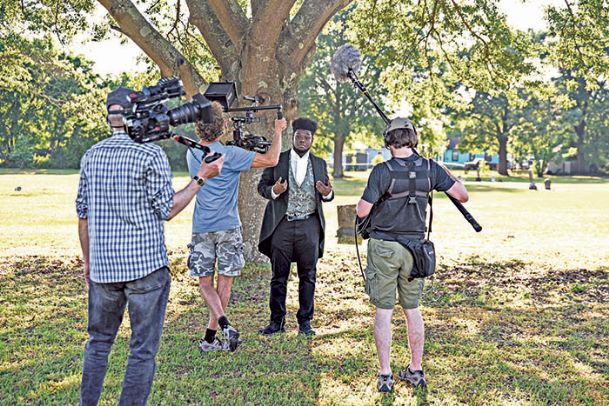 An HBO crew films Mississippi School for Mathematics and Science senior Dairian Bowles, of Byhalia, during a dress rehearsal for the schoolâs production of Eighth of May celebration Tuesday evening. The HBO documentary, which features the MSMS production, will highlight six different cities across the United States and is based on James and Deborah Fallowsâ book âOur Town.â Bowles will portray Senator Robert Gleed during tonightâs performance at Sandfield Cemetery at 6 p.m. today. Bowles is the son of Melissa and Hercules Bowles. Photo by: Deanna Robinson/Dispatch Staff

An HBO crew films MSMS seniors Taniya Bland and Sierra Reyndols, during a dress rehearsal for the MSMS Eighth of May celebration Tuesday afternoon at Sandfield Cemetery. The HBO documentary, which features the MSMS production, will highlight six different cities across the United States and is based on James and Deborah Fallowsâ book âOur Town.â
Photo by: Deanna Robinson/Dispatch Staff

Cameras and microphones circled Mississippi School for Mathematics and Science students during their dress rehearsal for the school's Eighth of May production in Sandfield Cemetery.

The annual performance, which MSMS students put on to celebrate local African-American history, this year will be featured in an upcoming HBO documentary, "Our Town," modeled after Deborah and James Fallows' 2018 book of the same name, which profiled 25 cities in the country -- including Columbus.

"It was partly a regional mix and we wanted to cover the South," James Fallows said. "There are so many interesting things happening in the area from the industrial changes to some of the things going on at the schools. It was just the richness of the economic and cultural activities underway in this part of Mississippi."

Filmmakers Jeanne Jordan and Steven Ascher say Columbus is one of six cities chosen for the documentary. The crew has been in town since Sunday night shooting scenery throughout the city, but their focus is on the Eighth of May production.

Every year on May 8, MSMS teacher Chuck Yarborough assigns students in his African-American history class to research influential figures locally and celebrate the Union soldiers freeing slaves in Lowndes County on May 8, 1865. Each student will dress as one of those figures and share stories of local African-American history from the late 19th and early 20th centuries.

The Eighth of May celebration will start at 5:30 p.m. today with the Sandfield Cemetery historical landmark presentation, and performances will begin at 6.

"It's just really amazing," Jordan said. "This afternoon we met with Mr. Yarborough and students at the library. They just showed us the process on how they hone in on who they do and the kind of research they do. This is really unique. I doubt there's a lot of things like this around the United States. We are just really thrilled to be capturing this. Especially at this time, it's inspirational."

James Fallows, a journalist for The Atlantic, said he hopes the documentary, like his book, will bring a united front while focusing on local success stories.

"The main point of our book and what we've been doing in the Atlantic Post articles, essentially is to let people know at a time of real division and paralysis at the national level of politics, no matter what your political perspective is, there's lots of places around the country where there's all these impressive signs of local renewal," he said. "It's that contrast between the national-level divisiveness and a lot of local progress and possibilities. That's the main point."

For their book, the Fallows traveled throughout America in a propeller plane. They have often returned to Columbus visiting friends and watching MSMS performances.

"It's exciting and fun. We like the people that we've met around here just because we can tell how seriously they are dealing with all the various both challenges and opportunities," James Fallows said. "It's a place that makes an impression on you."

The documentary is slated to premier late in 2020.

Senior Erin Williams, 18, watched the Eighth of May performance last year as a spectator, which prompted her to take Yarborough's African-American history course. This year, she'll embody the role of Susie Mitchell.

"(She is) the wife of William Isaac Mitchell," Williams said. "The story is mostly about her husband and what he did for this community. By the early 1880s, he was the first African-American principal of Union Academy. (In the performance) I talk about his dedication to education and how he was active in education till his death."

Unlike most research projects, Williams said the resources were limited for the African-American community.

After taking off her microphone from HBO, Williams said it was an honor for MSMS students to be featured in such high esteem in the documentary.

"When I heard HBO was going to be here, I thought it was a joke," Williams said. "Then they came. This is crazy. It's really crazy, but I think that this documentary will be important. I know that this project isn't the whole focus, but this could impact somebody. So people can further educate themselves."

Watching his students, Yarborough said this year's class has exceeded his expectations and he expects a crowd of at least 300 people for tonight's performance.

"Teachers are in the business of hope," Yarborough said. "These students renew annually my sense of hope for our community, our state and our nation. Once again that program is doing that for me, and hope it will do that for the community as well. ... We are focusing on local history so we can see the challenges and struggles overcome on the local level, which shows us how we can also meet the challenges and overcome hardships at the national level.

"I think the HBO documentary presents a unique, amazing opportunity to put Columbus on the cultural map," he added. "I've come to realize how unique this type of research and program is."

Senior Ezra McWilliams will for the second straight year portray Allen Rabb, who was born in Lowndes County in 1866. With film crews walking throughout Sandfield, McWilliams said it's about time Rabb's and similar stories make it to the national stage.

"It made me feel good because stuff like this needs to come to surface," McWilliams said. "You hear about Martin Luther King, Rosa Parks, Thurgood Marshall, Barack Obama, all those guys, but you tend to forget the small guys that helped propel the movement. Allen Rabb owned a meat market. You got to delve into their history and their story."