Willie 'Hoot' West, 81, passes away after 52 years as constable 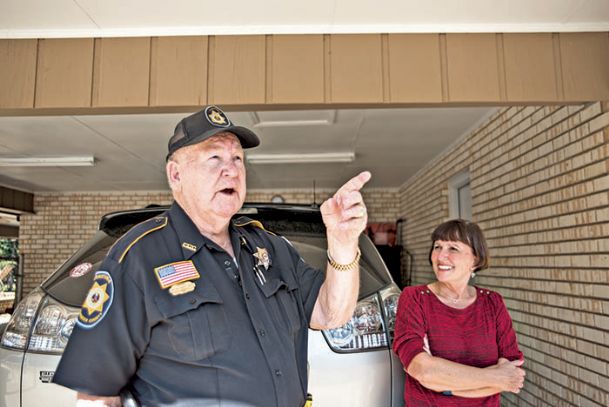 Karen Hall, right, listens as Constable Willie "Hoot" West repeats his story about finding the gunman who accidentally shot out Hall's back car window at her home in Caledonia in this April 2017 file photo. West passed away Thursday, seven months short of finishing his 13th term as constable. Photo by: Dispatch file photo

Earlier this year, before the qualifying deadline, Hoot West seemed conflicted about whether to run for a 14th term as District 1 constable in Lowndes County.

It was something he talked about with his daughter, Debra Edmondson.

"I won't say he didn't want to run again," she said. "I think he would have liked to have been able to run, but he decided it was just time to step down and let somebody else do it. Me, personally, I wanted him to enjoy a little bit of rest."

Willie Houston "Hoot" West, 81, died Thursday at North Mississippi Medical Center in Tupelo, three days after his car left the roadway in a turn on Harrison Road and crashed into a tree at about 8 a.m. Monday.

West, as it turned out, was doing the job he had been doing for 13 terms as constable, covering a span of almost 52 years.

"He was out working Monday morning," said his son, Mike. "Serving papers."

In the days since West's car accident, the people of District 1, which includes West's lifelong home of Caledonia, awaited word on his condition, filling up Facebook pages with well-wishes, calling Mike and Debra's cellphone, and offering up prayers for the friendly, familiar West.

"Somebody said it was like Mayberry losing Andy Taylor," Mike said. "I can see why they would think of Dad kind of like that."

West entered law enforcement in 1962 as a deputy in the Lowndes County Sheriff's Office, but it was as constable that he "became a legend," said Mike.

West was elected as District 1 constable in November 1967 and was re-elected an astonishing 12 times, which, Debra said, is revealing.

It's the nature of the job for constables to make some enemies of the neighbors he had to serve papers or arrest. But West had a way of soothing hurt feelings, Edmondson said.

"A lot of people told me that dad was good to them," Edmondson said. "He would give people a fair shake. People would tell me, 'You know, your dad could have done this or that, but he worked with me and we worked it out.'"

"I think dad gave everybody a fair shake," Mike said. "But when he told you to do something, he meant it."

Over his five decades in law enforcement, West was shot and stabbed and exposed to other dangers, but he never seemed to lose his good humor.

"Hoot always referred to all citizens -- family, friends, even foes alike as -- as 'my people,'" said Caledonia Mayor Mitch Wiggins, whose late father was a close friend of West's. "He looked out for people. He believed his job was a calling and has already served faithfully anytime, day or night."

Over the long years, West seemed to be as much a father-figure in town as a law enforcement officer.

"You always got the feeling Hoot was watching out for you," said Karen Hall, who lives with her husband, Steve, on Wolfe Road.

The Halls have a perfect example of that.

About a year-and-a-half ago, the Halls were alarmed when bullets sprayed their home and car on a Saturday afternoon, seemingly out of nowhere.

"About a minute later, here he comes flying down the road with his lights flashing," she said.

For four days, Hoot canvassed the countryside, listening for gun fire, before honing in on a nearby property and discovering the source of the shooting. A resident and friends were using a dirt berm there for target practice, not realizing that the high-powered bullets were ricocheting off the berm and hitting other properties.

After talking to the shooter, West was convinced there was no malicious intent. He gave him "a talking to," then brought him to the Halls' home to make an apology.

Mike said his father always loved his work, even the hard or dangerous parts.

"Right up to the end, he could handle himself," he said. "He was always laughing. He loved being out driving around, visiting with people. It was the perfect job for him. In the end, he had a lot more friends than enemies.

"If you had a problem, you could always call Hoot," he added. "He always seemed to be around."

Even when you preferred him not to be, Hall said.

"A few years ago, I had left the house without the key to the gate around our house," Hall recalled. "I didn't know what to do, so I started trying to climb over the fence. Sure enough, here comes Hoot, just as I'm straddling the fence. I told him, 'You're great at catching burglars, aren't you?' We both got a good laugh out of that."

Wiggins said residents of District 1 have lost something in West that cannot likely be replaced. A new constable will be elected in November, but there's no Hoot West on the ballot.

"I had the honor of being raised in a community being protected by a man like Hoot West," Wiggins said. "That's pretty special."