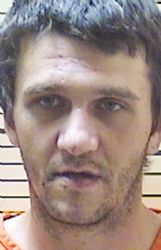 A Tupelo man has been indicted for cyberstalking and threatening to have police arrest another man on false accusations of pedophilia.

Oktibbeha County grand jurors indicted James Lambert, 32, in January for charges of cyberstalking, extortion and possession of methamphetamine. Lambert was served his indictment on Wednesday.

Lambert is accused of sending threatening text messages to a couple, which were received by the male victim. According to court files, on June 2 and June 3, 2018, Lambert threatened to "falsely expose" the man for pedophilia and "have the victim arrested for sex-related crimes."

The indictment file says Lambert demanded a vehicle and money while making the threats.

Lambert was also indicted for possession of methamphetamine, for having between .1 and two grams of the drug.

According to his indictment, Lambert is a habitual offender, with previous convictions in Alcorn County in April 2009 for uttering forgery and February 2017 for auto burglary.