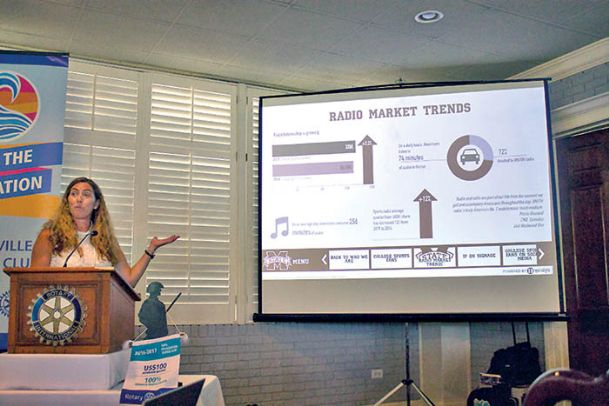 For Ann Brett Strickland, seeing the Mississippi State Bulldogs succeed is as much a business matter as it is one for cheering for the home team.

Strickland is the general manager of Bulldog Sports Properties of Learfield Communications and spoke to the Starkville Rotary Club on Monday about the work the organization does to promote Bulldog athletics.

Strickland said Mississippi State has a strong brand, which, in a way, makes it easy to market. She said that's bolstered by the fact that college sports, with nearly 190 million fans nationwide, are the most popular type of sports in the United States. College football, individually, with its 162 million fans, is second only to the NFL and its 185 million fans.

Mississippi State's recent athletic success -- consistent winning in football, one of the top women's basketball programs in the country, back-to-back trips to the College World Series in baseball and the continued resurgence of the men's basketball program -- have helped drive growth for Bulldog Sports properties.

Strickland said hailstate.com, the main MSU athletics website, draws almost 2.5 million hits in a year and 1.3 million people engage with MSU athletic brands on social media platforms annually. She added that more than 800,000 people are drawn to Starkville and MSU's campus for athletic events in a year.

"Despite the trends in radio to listen to Pandora or Spotify, or watch the SEC Network, our fan base continues to listen to our announcers," she said. "We have 28 stations all across the state, as well as satellite and internet radio. Over four million people can listen to our broadcasts on a football Saturday."

All of that growth helps Bulldog Sports Properties work with businesses to advertise with Mississippi State, and she said MSU fans have shown they will support companies that support the university.

According to a Bulldog Sports Properties survey, 86 percent of MSU fans said they'd support switching brands or changing buying habits to support a sponsor. Similarly sized majorities said supporting the university has a positive effect on the brand image or that they're proud to use sponsor companies' products.

"Once expenses come out, we give the university several million dollars every year," she said.