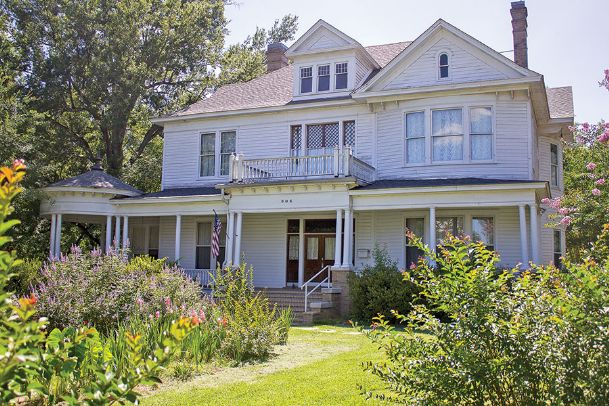 Concerns swept over social media that the Magruder-Newsom House, across from Overstreet Elementary School, would lose its Mississippi landmark designation. However, the portion of the property behind the home is being considered for de-designation, rather than the house. Photo by: Alex Holloway/Dispatch Staff

A requested Mississippi landmark de-designation for a property on South Jackson Street will not affect a more than 100-year-old home that sits on the property.

Concerns that the Magruder-Newsom House, located on South Jackson Street across from Overstreet Elementary School, would lose its Mississippi landmark status swept across social media Wednesday night and Thursday. The concern followed the publication of a newspaper notice that the landowner is requesting that the Mississippi Department of Archives and History remove a landmark designation on the property.

However, Michelle Jones, an architectural historian with MDAH and Starkville resident, said the request for landmark de-designation applies to a portion of the large parcel the Magruder-Newsom House sits on, and not the building itself.

The lot the home sits on stretches from South Jackson Street in the front to Lafayette Street behind the home. Jones noted that most of the surrounding properties have been subdivided, and there's interest from a potential buyer in using the part of lot that's currently vacant.

"When that designation was made, it was for the entire property (including the home)," she said. "At this point, it's been in private ownership for a while and there's a potential buyer who would like to develop the western side of the lot. The Mississippi Department of Archives would rather not administer regulations to new construction."

Starkville Community Development personnel confirmed that the city has received some interest in the lot. Assistant City Planner Emily Corban said, while nothing official has come in, there's been a proposal, presented by a representative of Harvest Group, LLC, to use the western, unoccupied portion of the lot to build new residences. The land is zoned R-2 residential, which Corban said only allows for single-family residential construction.

The Dispatch could not reach anyone with Harvest Group, LLC, for comment by press time.

The Magruder-Newsom House is listed as being owned by Genevieve Lois Maxon-Stark on an Oktibbeha County tax parcel map.

Kim Stevens, a Realtor with Coldwell Banker who is listed as an agent for the home's sale, said she couldn't comment on any potential buyers. However, she said the home has not yet been purchased and the listing price, which includes the entire property, is $575,000.

Alexis Gregory, a member of Starkville's planning and zoning commission and associate professor in Mississippi State University's School of Architecture, posted on Wednesday evening that she was worried about the home's future if it lost the landmark designation.

On Thursday, she told The Dispatch she was relieved to see the designation was for an unoccupied portion of the land, and not the home itself. Gregory also said she contacted Michael Fazio, chairman of the Starkville Historic Preservation Commission, about the home, and Fazio indicated that the commission had reviewed the matter and didn't have any concerns, which helped assuage her fears.

It's possible that the lot subdivision, should MDAH approve the de-designation, will come before the planning and zoning commission. Gregory said she didn't have enough information to comment on how she might vote on that matter. However, she said she's glad to see the home will retain its landmark status, especially in the face of Starkville losing other historic properties to redevelopment in recent years, and one -- at the corner of Highway 12 and Louisville Street-- being considered for removal to build a mixed commercial and residential development.

"As a private citizen, it is good to hear that the house itself is not going to get the landmark designation removed," she said. "We've lost so many historic properties and may lose the historic property at Highway 12 and Louisville Street."

5. Leach: SEC hasn't decided 'whether it's the dog or the vehicle' on playing 2020 football season STARKVILLE & OKTIBBEHA COUNTY