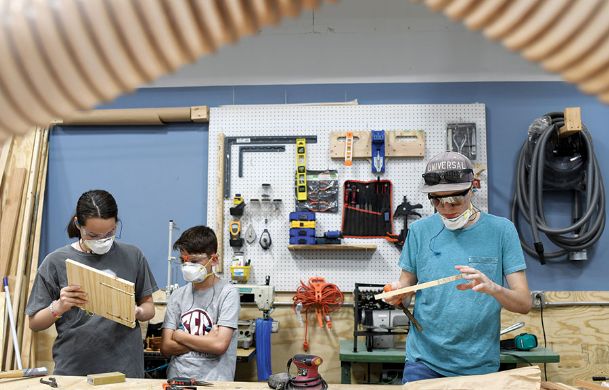 From left, Anna Richey, 15, A.J. Richey, 11, and Sam Moore build phone charging stands during The Idea Shop's Father's Day gift-making workshop on Friday. During the workshop, attendees could make either a charging stand or a set of customized coasters. Photo by: Jennifer Mosbrucker/Dispatch Staff

The Idea Shop in Starkville held a Father's Day gift-making workshop on Friday. A total of three workshop sessions were held on Friday and Saturday.
Photo by: Jennifer Mosbrucker/Dispatch Staff

Sam Moore blows wood shavings off of his Father's Day project on Friday at The Idea Shop in Starkville. Moore came with his two brothers after their mother learned about the event through a promotional email.
Photo by: Jennifer Mosbrucker/Dispatch Staff

Anna Richey and her younger brother, A.J., didn't have much experience with woodworking before Friday afternoon.

That didn't keep the two from joining a six-person group in the Idea Shop downtown to handcraft a Father's Day gift for their father, Mike.

Anna, 15, is a student at Starkville High School and A.J., 11, will begin attending Armstrong Middle School in the fall. Anna heard about the workshop from her best friend and decided to attend with her brother in tow.

As the Idea Shop, a makerspace that's overseen by Mississippi State University's Center for Entrepreneurship and Outreach, buzzed with activity, Anna and A.J. set about creating their gift -- a phone charging stand with room for a watch and other gadgets.

They said they enjoyed the experience, but were more looking forward to making something special, with their own hands, for their dad.

"I think it's cool that we can make something instead of having to go out and buy something (for Father's Day)," A.J. said. "It's our own work and not someone else's."

Though they were new to the process, Anna and A.J. said it wasn't too hard to make the phone charging stand under the careful guidance of Program Coordinator Michael Lane. He oversaw the Father's Day workshop groups as they used the array of tools in the back of the Idea Shop to drill, sand and otherwise prepare their creations for staining and engraving.

The Idea Shop hosted two of the Father's Day workshops on Friday and one on Saturday. Brook Lammert, a coordinator for the Idea Shop with the E-Center, said the workshops are the first community-focused events the facility has hosted.

Lane said the groups, which could either make phone charging stands or customized coasters, did well. Most of the participants, he said, were new to crafting.

"I grew up with a shop," Lane said. "My family's all in construction, carpentry and that type of thing. Part of what got me involved in the maker room in the first place is giving other people the opportunities I had growing up. You never know when something they experience here might kickstart a career later down the road."

Audrey Caroline Williams and her younger sister, Ali Grace, also made a phone charging stand during the morning session. Audrey, 12, said Friday's crafting was a new experience for her -- though her father enjoys woodworking.

Now, she said, she might take chances in the future to help him work on his projects.

"I'm not really into crafting at all," Audrey said. "But then I tried this and it's actually really fun. I think I can help him with a project or something."

Jackson Underwood, who will begin attending East Mississippi Community College in the fall, made custom coasters -- engraved with a laser-engraving machine at the front of the Idea Shop. One of the coasters featured a character from the "Squidbillies" TV show, while the other featured Japeth the goat from the film "Hoodwinked."

"He loves it," Underwood said of the "Squidbililies." "I also got him the goat from 'Hoodwinked' because he really enjoys that song (the goat sings) too.

"It's great," he added. "I think it gives some more meaning behind it makes it more heartfelt. I think this is something he'll definitely use."

The Idea Shop opened this spring as an extension of makerspaces on campus.

Lammert said the E-Center wanted to focus on making sure the retail portion of the shop, which allows entrepreneurs to sell their products, was up and going before rolling out community-focused programs like the weekend workshops.

The workshops were planned to have six people each, due to space and equipment limitations. The first workshop, she said, actually ended up with seven participants, and the latter two each filled up.

"I was excited," she said. "My biggest fear when we put this out there was (wondering) 'Is this something the community wants or is this just an idea that we have?' I thought we might not get a great response, but we did, and that's exciting."

With the Father's Day workshops' success, Lammert said she hopes to continue to increase the number of offerings the Idea Shop has for the community, whether that's through hosting more events or going out to work with organizations like the school district or Boys and Girls Club.

"I'm hoping to host one at least once a month to do different concepts and different projects for different age groups," she said.