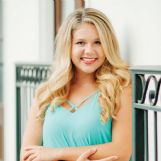 Lake Little, 18, died in a plane crash in Oxford Saturday. She was daughter of Starkville aldermen David Little and is remembered for her love of flying and willingness to help people.
Photo by: Courtesy photo

For the last two years of Elizabeth Lake Little's young life, her thoughts seemed suspended between heaven and earth.

The ever-busy, ever-smiling, ever-planning young woman may have been well-grounded in her faith, her plans for the future and her devotion to friends and family, but her heart took flight when she was in the cockpit.

Little, 18, died Saturday evening at a Memphis trauma center from injuries she suffered after crashing a single-engine airplane she was flying solo on the grounds of the University of Mississippi golf course.

The news of her death rolled like shock waves through the city of Starkville, where she was active in a number of community organizations, including Starkville Academy, where she was a popular student and member of the 2019 graduating class, and First Baptist Church, where she played an active role in a variety of church programs.

Lake, as she was known, was the youngest child of Starkville Alderman David Little and his wife, Pattie. Her older brother, Layton Little, described his sister's passion for flying as a metaphor her loved ones will embrace for comfort in the wake of her tragic passing.

"She felt at home in the air and it's comforting now that she has her wings as she is with our Lord," he said.

Layton Little said his sister's infatuation with flying came after talking with a family friend who is a private pilot when she was 16.

"She started off with a glider and since the first day she was absolutely in love with flying," he said. "She always came home talking about her gliding experience, so it only made sense to progress to a single-engine plane. She flew as often as she could with her busy schedule."

Flying was but one of her many interests.

Later this month, she was scheduled to represent Starkville in the Mississippi Miss Hospitality pageant. In her pageant profile, she noted her love of flying and said she wanted to fly for FedEx. She said she planned to attend the University of Southern Mississippi in the fall and ultimately open her own speech pathology clinic to help children and the elderly while maintaining her aviation career.

For Starkville Academy headmaster Jeremy Nicholas, Little seemed the perfect choice to represent her hometown in the Miss Hospitality competition.

"Lake had a commanding presence about her that enabled her to stand out in a crowd and win over the room," said Nicholas, who described Little as talented, driven and goal-oriented. "She was someone who was more than willing to help others, whether it be working with young kids at school or serving on mission trips with her church. Her ability to relate to people of all ages allowed her to engage in activities and experiences that brought her in contact with many people in Starkville and beyond."

Nicholas said Little seemed to have a natural talent for drawing people out.

"Lake was spirited in a good and fun way, which meant she was always ready to challenge you with an idea or to debate a topic about which she was passionate," he said. "No matter the reason for talking to her, you rarely walked away without smiling for some reason or another."

The CAP, as it is known, helps young people pursue their flying careers by providing training, flight instructors and aircraft.

Little was flying a single-engine, Cessna Skyhawk (C-172) at the time of the crash.

According to FlightAware, which tracks air traffic, Little departed Golden Triangle Regional Airport in Columbus Saturday at 2:03 p.m. and arrived at University-Oxford Airport at 3:11 p.m.

According to a news release from the University of Mississippi, the fatal crash occurred approximately four minutes later. The news release said Little was practicing "touch and go" landings at the time of the crash.

The airport is about half a mile south of where the plane crashed.

The National Transportation Safety Board and the Federal Aviation Administration are investigating the accident.

FAA spokesman Eric Weiss said Sunday the preliminary report will be released in two weeks and the FAA will have no comment until then.

On Monday, Ed Malinowski, an air safety investigator with the NTSB, said he and FAA investigators are currently gathering evidence from the scene of the crash site. They will also review witness statements and investigate the aircraft and engine manufacturer.

"From the initial statements, we were told that the aircraft was climbing, made a turn, was slow and descended and impacted terrain," he said. "That's what was verbally told to me at the scene."

According to the FAA's pilot database, Little held a student pilot license. Under the database's list of restrictions, it listed that Little was not authorized to fly with passengers.

There were no passengers in the plane during Saturday's crash.

The airplane Little was piloting at the time of her death, tail number N994CP, is owned by CAP.

On the CAP website, Little is identified as holding the rank of Cadet Master Sergeant.

"Right now our focus is on the cadet's family and the members of her local squadron," Maj. Gen. Mark Smith, CAP national commander and CEO said in a statement posted on its website. "This is a tragic accident and we are praying for peace and comfort for everyone involved. We are working with the National Transportation Safety Board and the Federal Aviation Administration to determine what caused the crash."

Starkville Mayor Lynn Spruill, who like Little began flying as a teen before pursuing her own career as a Navy pilot, said there did not appear to be anything unusual about Little flying solo in a CAP aircraft.

"Flying solo is part of the licensing process," Spruill said. "As part of the process, you do fly cross-county flights, leaving from one airport and flying to another. I do know that the Civil Air Patrols rents its aircrafts to help young pilots in their program."