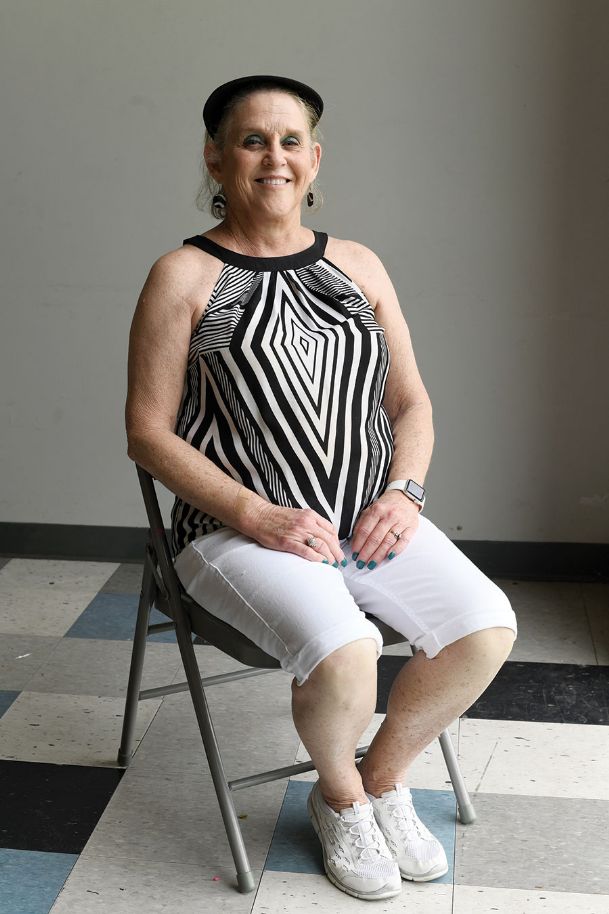 Diane Clark freestyle dances to "Brick House" on Friday at The Junction in Columbus. One of the Footloose Band members dedicated the song to Diane before it began.
Photo by: Jennifer Mosbrucker/Dispatch Staff

Diane Clark teaches an intermediate line dancing class last week at the Starkville Sportsplex. This was Clark's second class of the day. She teaches both an advanced and an intermediate class twice a week.
Photo by: Jennifer Mosbrucker/Dispatch Staff

If you've been to The Junction -- a dance hall for "family fun" as the flashing sign on the building purports -- then you've seen Diane Clark.

On any given Friday night in the hall at Phillips Hill Road and Highway 182 in Columbus, Clark leads the dance floor with a couple other women, clapping, screaming and high-fiving after every song the live band plays.

You probably would think Clark, 72, has danced her entire life, if you saw her turning in circles and swiftly changing direction to "Memory Lane." But she started only six years ago, after retiring from her 34-year career as a second-grade teacher in Starkville.

At that point, Clark thought she was done teaching forever. It turned out then that she was just between chapters.

Clark saw an advertisement in the newspaper for a line dancing class at the Starkville Sportsplex and thought she'd give it a try.

After three months of attending weekly classes, Clark grew frustrated because she wasn't coordinated enough to pick up the dances.

"I decided I was just too old to line dance, so I quit," Clark said.

Then she discovered most of the class members made up the Starkville Steppers, who regularly performed at nursing homes, including Trinity Place Retirement Community, where Clark's mother was living at the time. Those performances meant a lot to her mother, so Clark decided to try the class again and slowly started learning the dances.

"To my surprise, I missed dancing so much I finally joined again," Clark said.

After three years of taking class, Clark's instructor moved away, and the group almost disbanded. So Clark stepped up.

"We were going to stop meeting, but I couldn't stand to think about that. So I agreed to be the teacher," Clark said. "Most of the people in the class could dance better than me but I kept practicing and practicing."

Now, Clark's been teaching classes for beginner, intermediate and advanced dancers for three years on Mondays and Wednesdays. She said the class has "filled a void" in her life.

"I just transferred my love of teaching from children to adults," Clark said. "I was a very caring school teacher, and I hope I am that way with my dancers."

Sue Anderson, 68, who teaches class when Clark is unable, said Clark gives students study sheets for every dance they learn, with steps broken down by counts.

Anderson said she never thought she could learn to line dance at her age, and Clark's teaching method has made learning easier.

"She gives you anything you want to know on a sheet," Anderson said. "It helps a lot."

Clark said the "sweet" people, her students, are the best part of teaching line dancing.

"They'll do anything for you," Clark said. "If you're sick, they're going to be there with cards and food and all. If it's your birthday, they're going to bring you cake. I love the dancing, don't get me wrong, but it's the people."

In her classroom, the Sportsplex activity room last week, Clark demonstrated the dances at the front, where her 14 intermediate students could clearly see her movements, and directed them with teal-painted fingernails.

They danced in a clump to "Footloose," "Write this Down" and "Wagon Wheel," sometimes clapping, snapping and singing along.

Milo Burnham, 80, who's attended line dancing classes at the Sportsplex for around 9 years and learned from several instructors, described Clark as "fun" and said she "doesn't have a temper."

Her hour-long class at 1:30 p.m. ran late -- something Clark said happens almost every week -- because they were "having too much fun to stop."