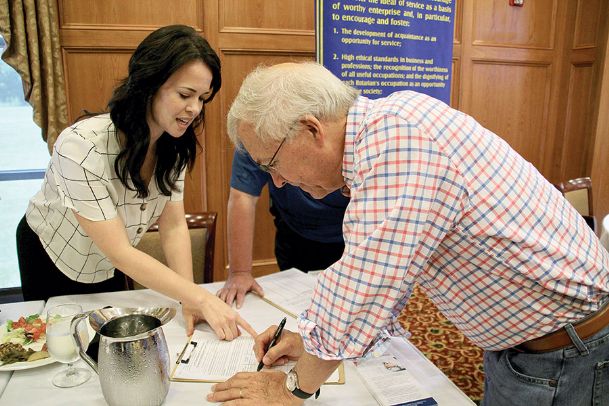 Jamie Grantham, communications director for Medical Marijuana 2020, helps Columbus Rotarian Chance Laws sign a petition to get the question of legalizing medical marijuana on the November 2020 voting ballot on Tuesday at the Lion Hills Center. Grantham spoke about how a medical cannabis program could work in Mississippi at the club's regular meeting. Photo by: Victoria Cheyne/Dispatch Staff

If roughly 28,700 Mississippi more voters sign the petition for medical marijuana this summer, then the question of legalizing it will have a place on the November 2020 ballot.

Thirty-three states and Washington, D.C. have legalized medical marijuana. Mississippi has partially decriminalized marijuana. But medical use, and recreational use, are still illegal.

Grantham described to Rotarians what the program could look like if medical marijuana were legalized in the state, based on regulations other states have put in place and what Medical Marijuana 2020 recommends.

The state Department of Health would regulate every facet of the program, Grantham said -- growing the plant, processing and testing the substance and licensing and overseeing treatment centers where products would be sold.

Only Mississippi licensed physicians could prescribe marijuana products to people suffering from "debilitating medical conditions" at their discretion.

"This is not for a stubbed toe or a headache or anything like that," Grantham said. "These are for very serious conditions that people suffer from daily like multiple sclerosis, cancer, Parkinson's disease, seizure disorders, those kinds of things."

Forms of the substance include cream, infused tea, patches and pills, to best target patients' pain and ailments. A Rotarian asked if patients would have the option to smoke marijuana, and Grantham's blunt answer was yes.

"For some patients that's the quickest way to get relief if they can't keep something else down," Grantham said.

Eligible patients could purchase no more than 2.5 ounces of the substance in a two-week period, Grantham said. Purchases would be tracked using state-issued medical marijuana ID cards and a statewide database to comply with the limit.

"If you were to go in and purchase your medication and then run down the street as fast as you can, it would be already up at the next one and entered in the database," Grantham said.

She said states with medical marijuana laws have a 24.8-percent lower average annual opioid overdose and death rate compared to states without such laws, citing a statistic from a 2014 study published in the Journal of the American Medical Association.

"It is the No. 1 thing we can do to decrease the opioid overdoses and deaths across the nation," Grantham said. "There's nothing else that can achieve that."

However, a recent study published in Proceedings of the National Academy of Sciences found that the trend in the 2014 study, spanning 1999-2010, hasn't held up over time, and uncovered no evidence "that either broader (recreational) or more restrictive (low-tetrahydrocannabinol) cannabis laws were associated with changes in opioid overdose mortality."

Grantham fielded questions about accessibility, affordability, driving under the influence and how the program would ensure cannabis not be used recreationally.

In her responses, she said the cost depends on the product and concentration and the market, and didn't name a figure accurate for Mississippi patients. The average patient in Arizona, a program studied by Medical Marijuana 2020's steering committee, spent $60 to $70 per purchase, Grantham said.

Purchases are not covered by insurance because medical marijuana is not federally legal.

A Rotarian asked how someone in "podunk" Mississippi would get their medication if a treatment center wasn't nearby. Ideally, Grantham said, local privately owned dispenseries, licensed through the health department, would open across the state.

In addressing concerns about driving under the influence and abuse of the medication, Grantham said those would "still be illegal."

"This is to be treated like any other medicine," Grantham said. "Driving-wise or sharing medications or anything like that, that's illegal no matter what you have. ... That's not allowed."

Grantham said campaigners are hoping to have collected the remaining signatures by the end of July. At the end of the meeting, Grantham had collected 14 signatures from Rotarians.