Historic preservation taken out of this world: Oxford couple founds 'For All Moonkind' to push for protection of moon landing sites, human objects in space 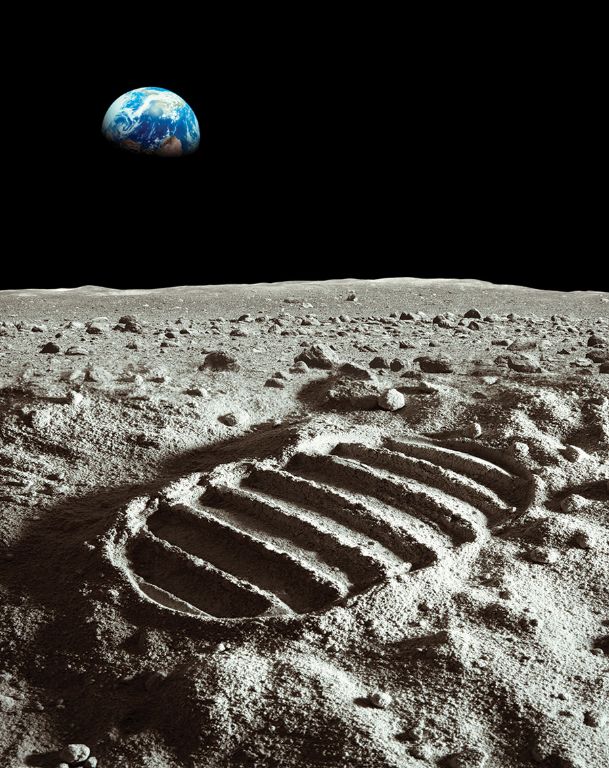 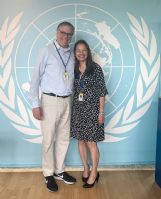 Tim and Michelle Hanlon, founders of the nonprofit organization For All Moonkind, pose at a meeting of the United Nations' Committee for the Peaceful Uses of Outer Space in Vienna, Austria in 2017. Their nonprofit, which advocates for historic preservation in space, is one of 44 non-governmental organizations that has been named a Permanent Observer of the committee.
Photo by: Courtesy photo/For All Moonkind

Tim Hanlon, who c-founded For All Moonkind with his wife Michelle, designed this poster to raise awareness of what might happen to Apollo landing sites and other evidence of human activity in space if international law doesn't protect those sites.
Photo by: Courtesy photo/For All Moonkind

Fifty years ago tomorrow astronauts Neil Armstrong and Buzz Aldrin became the first humans to ever walk on the moon.

They left behind ample evidence of their more than 21-hour visit, including boot prints, medals of Soviet cosmonauts who died before the Apollo 11 mission and a small plaque inscribed with messages of peace from world leaders. That evidence is still there.

Michelle and Tim Hanlon are hoping that in future momentous anniversaries of the moon landing, the evidence -- and evidence of human activity at more than 100 other sites on the moon -- will be there still.

In 2017, the husband-wife team founded For All Moonkind, a nonprofit made of up of attorneys and archaeologists advocating for the preservation of human materials on the moon. Drawing on international law and the World Heritage Convention, they hope to help write international protections for historic sites in space -- including everything from lunar sites where Soviet spacecraft landed to tracks left by the Chinese Yutu rovers -- to prevent governments and private companies from disturbing those pieces of history.

"We really believe if we can create the framework now for all of outer space, it will really help humanity explore the heavens much more sustainably and peacefully," said Michelle Hanlon, associate director of the National Center for Air and Space Law at the University of Mississippi.

The Hanlons, who split their time between Oxford and Connecticut, where Tim owns advertising company Lean & Mean, founded the organization after Michelle realized there was minimal protection for objects in space and none at all for landing sites on the moon. While Michelle focused on the legal issues, Tim turned to building a brand that would raise awareness of and advocate for historic preservation in space.

'We can protect it now'

Tim was 11 when Armstrong and Aldrin walked on the moon. He was at scouting camp and he and his peers had all gathered around a television to watch the landing.

"I know it was black and white, and I know the images were flickering and there was a lot of static, but to me, they were more memorable than anything I've seen in HD," he said.

"It's seared into my memory, that moment when you're 11 1/2 years old and you're surrounded by other 11-1/2-year-olds, and you just marvel at the achievement," he added. "I remember walking back to the tent and looking up at the moon and thinking, 'Oh my gosh, they're up there right now.'"

Michelle, who is a little younger, doesn't remember the moon landing. Her view is much more "futuristic," she said.

"I believe in Star Trek," she said. "I believe that's the future of our civilization. ... To me, the moon landing is that first step. I call Tranquility Base the cradle of our space-faring civilization, the way we have cradles of civilization on earth."

Preservation is an idea countries all over the world have agreed is important. Michelle pointed out 193 countries have ratified the World Heritage Convention, an agreement between nations that World Heritage sites such as Stonehenge in the United Kingdom and the Taj Mahal in India belong to humanity as a whole and should be protected. That same idea, she argues, should be applied to space.

For All Moonkind has published a "Declaration of Objectives and Activities Regarding Cultural Heritage in Outer Space," which recognizes that interfering with landing sites would result in a loss of some of that heritage. They are currently recruiting space-faring companies and other entities to sign the declaration. Michelle also helped write the "One Small Step Act," which would require federal agencies issuing licenses for activities in space to prohibit damaging the Apollo 11 site. That act is currently awaiting a vote in Congress.

For All Moonkind is also one of 44 non-governmental organizations that have been named a Permanent Observer of the United Nations' Committee for the Peaceful Uses of Outer Space, which meets three times a year in Vienna, Austria. The Hanlons stressed they want their advocacy to be global and protect far more than just the spot where Armstrong and Aldrin walked.

"We're being given a gift by being able to protect those sites before anybody's gone back," Michelle said. "If you look at historic sites in the U.S. or anywhere in the world, it's always 'Oh, we have to stop this from crumbling,' ... Now we've got this history sitting there pristine waiting for U.S. to protect it. It's such a great opportunity. We don't want 3,000 years from now our whatever great-great-great-grandchildren having to dig around on the moon for the first landing site. We can protect it now."

'It's going to get crowded up there'

Companies around the world are now starting to plan launches to the moon and beyond. In April, Israeli company SpaceIL launched a lunar spacecraft that crashed into the moon. Other companies and organizations have launched satellites into space. American companies Astrobotic and Masten Space Systems, Japan-based company ispace and Germany-based PTScientists are investing in technology to further human outreach into space.

"It's about to get crowded up there," Tim said.

Currently the Outer Space Treaty, which was signed in 1967 and provides the basis for international space law, holds countries responsible for the activities of their own citizens in space, and says they should show "due regard" for objects left there by others. However, Michelle said, as a legal concept, due regard weighs different criteria and isn't always specific enough.

"Basically it's a judgment call," she said in an email to The Dispatch. "We believe our cultural heritage deserves better protection than that."

She raised the example of a private citizen who came into possession of a bag Armstrong took back from the moon, which still had regolith, the dust covering the moon's surface, on it. After winning a legal battle with NASA over whose property the bag was, the citizen sold it for $1.8 million. That's the sort of price these objects could go for.

"The bootprints aren't protected at all," Michelle said. "There's nothing anyone can say if somebody runs over the bootprints or worse, picks up the dust, the regolith, that the bootprint is and brings it back to Earth to sell it.

"I'm not suggesting that any commercial company looking at the moon right now would do that," she added, "but the fact is that more and more companies are going to the moon, and more and more people are going to get there, and it's going to get very crowded. And we really need to protect those bootprints because they are an inspiration."

In the short term, the Hanlons and the rest of the team at For All Moonkind want the international protections in place. In the long term, Michelle said, they hope to help invest in technology that can preserve the sites, such as a common landing pad on the moon that will prevent damage to already-existing sites. Fifty years from now, she envisions a perimeter around major landing sites and plaques explaining their importance.

Fundraising for the organization goes to fund trips to U.N. meetings and other conferences, along with marketing materials and a children's book on outer space that Michelle wants to distribute to children in developing countries.

Both Hanlons stressed they hope further human exploration in space goes hand-in-hand with international cooperation, and they want the historic sites preserved for everyone, not just Americans.

"Neil Armstrong was American, but getting Apollo to the moon was a human achievement," Michelle said. "And I think every little girl in Nigeria ought to embrace it as much as any little girl here in Mississippi."