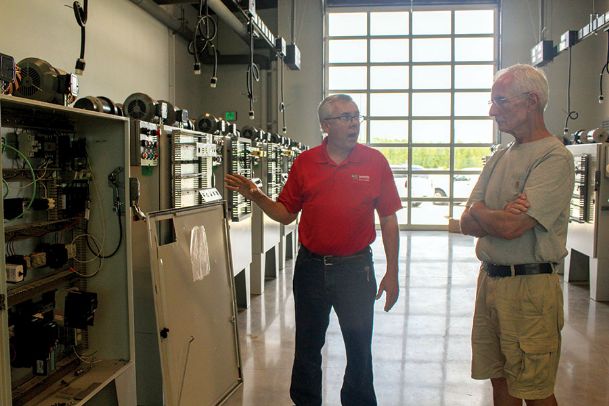 Stan West, left, a workforce technical instructor at East Mississippi Community College, shows Mike Clark one of the classrooms inside Communiversity. The building, which will open next month for the fall semester, was open to the public for three days last week for tours. Photo by: Amanda Lien/Dispatch Staff

Johnny Judson looks into one of the vacant bays Communiversity keeps open for companies to rent from EMCC. Johnson is one of more than 300 people who took guided tours of the $42 million facility ahead of its opening next month.
Photo by: Amanda Lien/Dispatch Staff

When Mike and Ellen Clark learned their 22-year-old grandson had enrolled in classes at Communiversity, East Mississippi Community College's $42-million advanced manufacturing skills training center on Highway 82 in Lowndes County scheduled to open for classes next month, they knew they had to see it for themselves.

On a tour led by Workforce Technical Instructor Stan West, the Clarks, from Starkville, marveled out loud at the spacious industrial training labs, where students will learn electrical wiring for homes, businesses and helicopters and how to program devices such as street lights and washing machines, among other skills. Mike Clark watched as West assisted in a demonstration of one of the programmable part manufacturing machines on which students learn to write code, and Ellen complimented the high ceilings and ample light flooding into the building from floor-to-ceiling windows at the end of each wing.

"It's very impressive," Ellen told The Dispatch after the tour. "... This is really going to bring new industry to the area, I think. People will want to come to where the work is going to be, and if (Communiversity) is graduating students that can go out and get a job, more companies will come here because they have workers available. It's a win-win."

The Clarks were just two of more than 300 people who visited the Communiversity during its three-day open house, which opened up the entire building to tour groups led by building staff and faculty. Because the facility was funded with local, state and federal dollars, the goal, West said, is to give the community a look at what that money paid for.

"We're really pleased with how the building came together from an instructional standpoint," he said. "So we're really excited to see what the community thinks. ... We've had supervisors from PACCAR come through, people who work in the industry, parents with kids that want to see what Communiversity is about. It's pretty cool."

The building houses instructors' offices and classrooms for all the credit programs related to manufacturing, along with computer labs and space for industrial outreach training. It will also include an Imagination Center, which will display products made in major industries all over the Golden Triangle, and has three empty manufacturing bays that start-up companies can rent from EMCC to produce products on a smaller scale.

Those vacant bays were a point of interest for Johnny Judson, who took a tour with his wife Carolyn and their young granddaughter. He said seeing EMCC provide a space for new companies to "grow into" the Golden Triangle makes him look forward to the growth of start-up manufacturing industries in the area.

"When you give someone access to what they need to build something, and if they can also hire students coming straight out of the programs here, that's really great for the area," he said. "I'm excited to see what comes out of here."

For most of the tour groups, the interest and excitement was simply in seeing the fruits of over two years of labor. Every time Mike and Ellen Clark would drive past the construction site, their curiosity would grow, Mike said.

"We've been watching the building go up for what feels like forever," he said. "We would wonder when it was going to be done. When we heard about the open house, we knew we had to come out and see it."

The personal connection of a grandson anticipating his education at the brand-new building didn't hurt either, Ellen added.

"It's nice to walk through and get a visual of where our grandson will be going to school," she said. "It'll be good to be able to hear about his classes and say, 'Oh, yeah, I was in that classroom. I know what you're talking about' even if I only understand the basics."

The project is funded through $18 million in state bonds, $10.7 million from the Appalachian Regional Commission, $10 million from Lowndes County, $2.5 million from Oktibbeha County, $1 million from Clay County and $400,000 from EMCC.